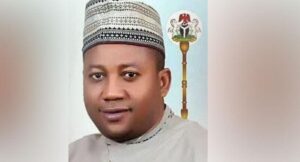 Another day another drama, Edo State is in the spotlight once again, this time around residents have refused to allow the Deputy Speaker Edo State of Assembly, Hon Roland Asoro to rest.

They have dragged him into the trend of stingy associations now making waves on social media, the Deputy Speaker EDHA was TODAY elected unanimously as the speaker of Stingy Lawmakers Association Of Nigeria.

According to respondents, the HONOR was bestowed on the EDHA Deputy speaker after a series of acts that has proved his loyalty to the stingy association club of Nigeria.

Recall that the past few weeks have been abuzz with a crazy trend on the stingy association of men and women. This association has branches all over the country and even has offices in foreign countries as well.

To be a member you have to show an allegiance of your consistency to the act of stinginess.
The association is a global one and boasts of top celebrities as coordinators.

In an unprecedented move TODAY some internet respondents largely on WhatsApp and Facebook constituted a people’s parliament of stingy lawmakers and behold the EDHA Deputy Speaker was elected as the Speaker Stingy Lawmakers Association Of Nigeria.

Part of the criteria for the award according to these jobless internet Nigerian youths is the ability to record zero achievements in your constituency.

You must have a proven record of being stingy to the last man even if it happens to be your closest paddy, colleague, relative, or loved ones.

Your constituents must pass a vote of no confidence in your representation and finally, you must have been tested to confirm that stinginess is in the blood.

It still baffles me why Edo respondents decided to vote one of their own as the Speaker of this newly inaugurated parliament.

In our subsequent bulletin, we shall x-ray the individual points that swung votes to the Edo lawmaker and how he defeated other lawmakers from around the country to emerge tops.

Although the majority of comments monitored point to the fresh revelation of his Personal Assistant who is presently bedridden and needs an urgent 15 Million for a kidney transplant.

Dem say d guy no fit help instead he said”I WOULD SEE WHAT I CAN DO”
He no gree release chichi according to dem.

Which kind of title be this again?