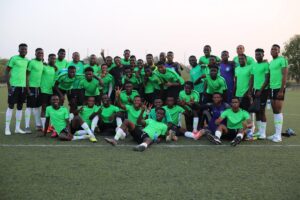 Super Eagles players have expressed determination to secure the maximum points in their Match day 3 AFCON match against the Leone Stars of Sierra Leone in Benin on Friday.

The players who spoke with newsmen immediate after their training session on Wednesday night at the Samuel Ogbemudia Stadium, said they are focused in their desire to defeat their opponent.

Victor Osimen, while noting that he was happy to be back to the team, said, “We are ready for the match.

“We desire nothing but victory; it will not be easy, but we will give our all.”

The Napoli of Italy star however expressed disappointment that fans will not be allowed into the stadium for the match.

He however appealed to them (fans) to watch and support them from home.

On whether he will score in the match, Osimen said, “My goals will come but the team victory is my overall desire.”

On his part, Joe Aribo, who said he was overwhelmed with the support from football fans in Benin, said they Eagles will play their normal game and win the match.

Meanwhile, the Eagles coach, Gernot Rohr, expressed happiness over the physical and mental state of the players.

He said only three of the players were singled out for special training because they just arrived at the Benin camp after a long journey.

It was reported that the three players were Victor Osimen, Jamiu Collins and Semi Ajayi.