A Thought on Elections @ Home N’ Abroad By John Mayaki 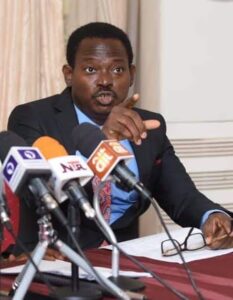 A journalist’s job often dons a philosophical habit. I watched the electioneering that produced Joe Biden, former vice president, as the president-elect of the United States of America. If all goes well, he will become the 46th president of that great country.

I was able to draw parallels between the US elections and the September 19 elections in Edo state. Before I proceed, I pay homage to my unfailing detractors, who always have the time to read me religiously in pursuit of their antagonistic pleasures even as I acknowledge with more reverence those who have been able to objectively study my work and my art. All alike are welcome to share their differing or parallel remarks in the comment section below. I will keep this as brief as possible.

The election of Joe Biden in the United States has been described as being not so much an approval of his person and politics as it was a rejection of Donald Trump’s. Allegations levelled against Trump include his links to organised crime, his suspected betrayal of the US by injudiciously fraternising with Vladimir Putin who many think is a fascist, his behavioural peculiarities which have convinced many that he is too graceless for the office of POTUS and his regular social media tirades which often offend logic and fact. He simply was not wanted and the electorate, including some over 74 million people (at last count) and the Electoral College rejected him.

Commentators have been unambiguous in stating that Joe Biden was the lesser of two evils, not the choice of good against evil. Indeed, one of the strong points of the Biden Campaign Team was the projection of Kamala Harris, a woman and a person of colour, as his running mate. I reiterate here that I am an indifferent party to the election and am not directly affected by the outcome of the election that I will be interested in antagonising any party.

In Edo State, the people were faced with similar options. The options were a governor who had betrayed democracy and underperformed and a well-meaning man who happened to be running under a party which ordinarily was equipped to win the elections.

I cannot speak so much on the freeness or fairness of the US elections, especially as fair hearing dictates that the allegations of electoral malpractices in the US be at least investigated if not taken seriously.

The truth was there for all to see – that the incumbent governor was an executive misfit having accomplished little more than an anthology of memoranda of understanding. There were little to no facts justifying the claims that former governor Adams Oshiomhole was a godfather, there was nothing against Pastor Osagie Ize-Iyamu except a claim that he was being supported by Adams Oshiomhole.

Moving forward, for Nigeria to develop, and for Edo to move forward, the electorate needs to shed the weighty apparels of ignorance, sentimentalism and tolerance for abuse of power. Without this, they will not have the wherewithal to make informed choices as the people of America did. They were able to identify and successfully pick the lesser of two evils while in Edo, the people picked the sentimental of two narratives and eschewed the more practical alternative.

It will be unfair to conclude that Edo is not ready for good governance; the state is. What is left is for the electorate to be educated appropriately on the machinery of governance and the spirit of democracy. But, how will that happen when their schools are being pulled down with gusto by the man they have decided to re-elect?

The people of Edo will remain great regardless of what obstacles may be placed in our paths. We must remain united and wary against divisiveness. In the final analysis, no man’s will is greater than that of the state. Hopefully, the people of Edo can remain united, watchful and committed to the task of letting the state grow. Edo must be an exemplar for democracy and economic growth.

“Our work begins with getting Covid-19 under control”- Joe Biden, U.S President-elect