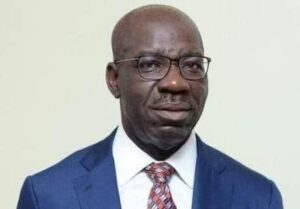 a photocopying machine for the errors in the disputed certificates with which Governor Godwin Obaseki was disqualified from seeking a second term under the platform of the All Progressives Congress (APC).

The party position is response in a reply to the petition by Action Democratic Party (ADP) against Godwin Obaseki challenging the jurisdiction of the Edo State Election Petition Tribunal to hear the petition.

The party said, “there was misstatement in mixing up the year of graduation with the year of admission”and that, “the original certificate was issued in A5 size; however, in order for the photocopy of the certificate to be attached to the Form CF001, the size was reduced to A4 and in the process, leaving out some information on the certificate”.

The PDP also admitted that in spite of the noticeable error, Obaseki proceeded to take part in the National Youth Service Corps scheme adding that was a pre-election matter which the tribunal cannot entertain.

According to the PDP, “While filling the forms for the election in 2016, Obaseki inadvertently and mistakenly wrote 1976 in a portion of the form for the year of the graduation which year was the year of his admission into the University of Ibadan.

“At the time Obaseki was completing his Form CF001 in 2016, he deposed to an affidavit stating that he had misplaced the originals of all of his certificates while changing offices with the intention to apply for a re-issuance if his certificates.

“Subsequently, before Obaseki submitted his Form EC9 in 2020, the original certificate issued by University of Ibadan was eventually found which has the signatures of the Vice-Chancellor and Registrar of the University”.

At the time Obaseki was completing his form CF001 in 2016, he deposed to an affidavit at the FCT High Court registry in 2016 stating that he had misplaced all his originals certificates and that he had written to all the school to reissued him with another certificate or give him certified true copy of the certificates.

However, the PDP said, “the tribunal lacks the jurisdiction to entertain the petition for reason that same is statute barred because the issues raised by the petitioner, according to the PDP are averments which are not relevant for the purpose of determining the petition at the Election Petition Tribunal, as the said averments relate to facts concerning the previous election conducted in 2016 and that since the election under dispute is that of September 2020 and as such should be dismissed”.‎

Governor Godwin Obaseki who was declared winner of the election would be battling to save his job over allegation of forgery and giving false information, as well as electoral mal-practices at the tribunal.

Former President of South Korea, Myung-bak goes back to prison on Corruption Charges