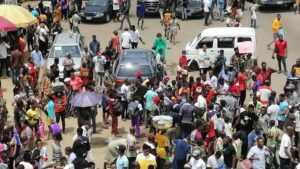 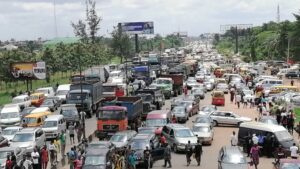 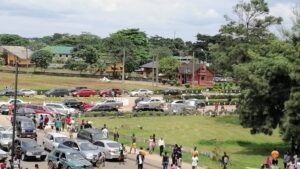 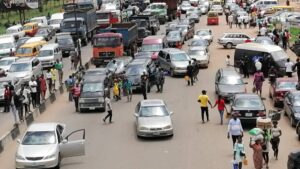 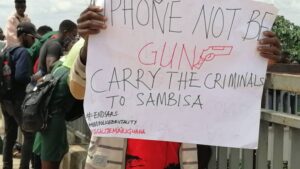 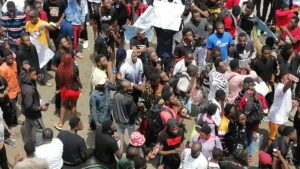 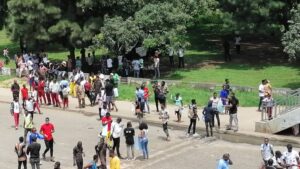 THERE was heavy vehicular traffic for several hours and commuters stranded along the Benin – Lagos road as thousands of young people took over the road protesting against activities of Nigerian police and humongous salaries for political office holders.

The carnival-like procession took over the entire highway and the flyover opposite the University of Benin with DJs blasting popular revolutionary songs of Fela Kuti, Femi Kuti, Idris Abdlukareem and several other popular artists.

Among the protesters were student union leaders of the University of Benin who were seen coordinating the demonstration. Some stranded commuters also became part of the protesters pledging their support for reforms.

Some policemen who came to the scene stayed away from the protesters who conducted themselves peacefully for the almost five hours it lasted
The President, Students Union Government of the University, Comrade Egwu Benjamin said; “We are adding our voice to what has been happening across the country and we are demanding an end of SARS. We are saying end SARS and they are giving us SWAT. What we are saying is that we want police reforms.

The government can do better; it should bring in more intellectuals into the police. More graduates and other intellectuals should come into the police, more persons will become interested. We were told Nigeria is the giant of Africa but now I can’t say our height. What we are saying is end SARS, end SWAT and give us a reformed police”

On his part, the SUG Public Relations Officer, Comrade Destiny Uanzekin said “This is a new generation and the beginning of a new order. It won’t just be end SARS now because our next point of call is the politicians.

A traveller who simply identified himself as Osarobo said he couldn’t help but join in the protest and that he was consoled with the fact that it is for the right course hence he joined the agitation. “I may be stranded right now but I am not frustrated because this is an overdue cry to reform the police force and not just SARS. Let police be well paid and see whether POS won’t stop on highways”