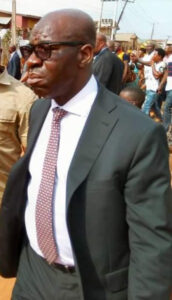 At the close of submission of petitions for the September 19 governorship election in Edo State on October 10, two more political parties have filed their petitions seeking to nullify the victory of Godwin Obaseki, the Peoples Democratic Party (PDP) candidate in the election.

Three parties had filed their petitions ahead of the closing date on Saturday.

At the close of entries, two separate petitions were filed by the Allied Peoples Movement (APM) and the New Nigeria Peoples Party, (NNPP) at the Edo State Governorship Election Petitions Tribunal in Benin City.

The APM and NNPP are asking the tribunal to nullify the declaration of Mr Obaseki as the winner of the election on the grounds that the conduct of the September poll violated, substantially, the provisions of the Constitution of the Federal Republic of Nigerian and the Extant Electoral Act 20 (As Amended 2015).

These two new petitions bring to five, the number of petitions against the election and the winner, with the close of submission of petitions on Saturday, October 10. Respondents have 21 days to respond to the issues canvassed in the petitions after which the tribunal will commence sitting.

The similarities in the two separate petitions and others before them bother on the issues of the eligibility or otherwise of Mr Obaseki to contest the election on the claim that he submitted false and or forged certificates to INEC, allegation of Mr Obaseki’s participation in two separate primary elections of two different political parties, namely: PDP and the All Progressive Congress (APC) for the same election, and other sundry matters.

The two separate petitions also sought similar reliefs such as a declaration that Mr Obaseki was not duly elected in the said September 19, 2020 election by virtue of his not being qualified to contest having allegedly submitted false and or forged certificate; a declaration that PDP and Mr Obaseki are not qualified to contest the poll in the first instance because of the alleged false and or forged certificate; an order asking INEC to conduct a fresh election among only qualified candidates in the aforesaid election to the exclusion of PDP and Mr Obaseki; and an order to withdraw the certificate of return earlier issued to Mr Obaseki by INEC.

NNPP, however, in its petition, sought a new relief to the extent that since Mr Obaseki did not indicate the primary school he attended, is deemed not to have been educated up to secondary school level or its equivalent, and as such was not qualified to contest the election.