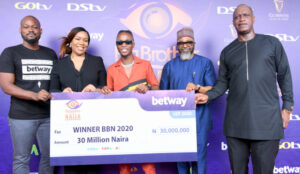 The chief executive officer, MultiChoice Nigeria, John Ugbe, has said the Big Brother Lockdown Season recorded the highest votes ever in the history of the show.

He also said it cost N3.5 billion to put together the reality show which lasted 10 weeks.

He stated this at a media briefing and prize presentation to the season’s winner, Laycon, in Lagos on Wednesday.

Mr Ugbe also said the show recorded 900 million votes (inclusive of online voting) from the different voting platforms and the DSTV application, which was way beyond the number of votes the show has ever recorded.

Speaking at the prize presentation, Mr Ugbe said, “Planning a show of this magnitude during these times was not without its challenges. For one, we resorted to holding virtual auditions where we received over 30,000 video entries, from which the ‘Lockdown 20’ were selected.”

He added that Big Brother Naija has changed the way employment and relevance are being defined.

In addition to participants becoming instant celebrities and influencers, other industries have been significantly impacted by the show and its participants.

He also disclosed that over 900 million votes were recorded across SMS, mobile, website and the DStv & GOtv apps.