According to a report Credited to Saturday Sun, Some Peoples Democratic Party (PDP) Governors have reportedly move against the 2023 Presidential Candidate of the Party, Atiku Abubakar. It will be recalled that the party has been facing internal crisis since the Emergence of the Delta State Governor, Ifeanyi Okowa as Running Mate to Atiku.

A Committee set up by the PDP National Chairman, Dr. Iyorchia Ayu endorsed Governor Nyesom Wike of Rivers State as the PDP Vice-presidential Candidate but Atiku later settled for Okowa, his Counterpart from Delta State.

The Source added that some PDP Governors prevailed on the Party’s National Chairman, Dr. Iyorchia Ayu to respect the agreement he inherited but the Former Senate President did not listen to them. Governors agreed to back a Southern Aspirant Okowa and his Edo State Counterpart, Governor Godwin Obaseki worked for the emergence of a Northern Candidate”, He revealed. 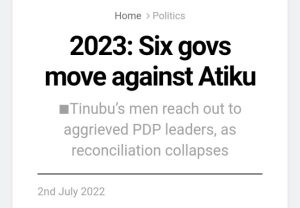 Why we treat the rich and poor differently — Hisbah