Former Deputy Senate President, Ike Ikweremadu has been trending on social media over the past few hours following his arrest in the United Kingdom.

It would be recalled that the former Nigerian lawmaker appeared in court on Thursday over an alleged human organ trafficking.

Reacting on the development, former publicity secretary of the People Democratic Party, Olisa Metuh has said that God will vindicate Ekweremadu at the end. He stated that he expects to see a lot of condemnations thrown at Ikweremadu.

Speaking through his Facebook page, Metuh said even people that knows the truth will not come out to defend the lawmaker.

“At times like this, you get a mob media trial. Even those who know the truth will keep quiet.” he said.

Metuh went further to describe Ike Ekweremadu as a kind person. He also used the opportunity to pray for him at this trying times.

“IKE EKWEREMADU is a kind hearted, jovial and humble man. He is a good man and God will vindicate him. My thoughts and prayers are with him and his wonderful family. It will surely end in praise in Jesus name.” 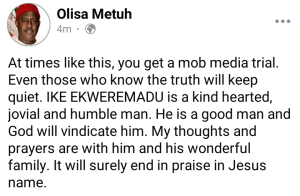 IPOB: Why Nnamdi Kanu Is Yet To Be Granted Bail — Buhari

IPOB: Why Nnamdi Kanu Is Yet To Be Granted Bail — Buhari