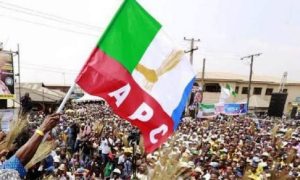 The shadow boxing and positioning for Political offices in the All Progres­sives Congress (APC), es­pecially over the party’s vice presidential ticket has come to a head and pitched no less than six members of the Progres­sive Governors against one another.

Slugging it for the number two ticket in the race for 2023 include the APC Caretaker Commit­tee Chairman, Mai Mala Buni, governor of Yobe State; his close ally Atiku Bagudu, governor of Keb­bi State and Chairman of the Progressive Gover­nors’ Forum (PGF), and Mohammed Abubakar Badaru of Jigawa State (Calculator Jigawa), a strong member of the tripod that runs the APC.

Other contestants for the VP Ticket, under the ruling party, according to party stakeholders, include the two Bellos, Governor Yahaya Bel­lo of Kogi State and his Niger State counterpart, Abubakar Sani Bello.

Prof Umaru Zullum of Borno State has also been mentioned as a possible candidate for VP even though his associates try to dismiss his aspiration as the handiwork of de­tractors.

The stiff contest, we gathered, has also cre­ated confusion in the proposed zoning ar­rangement, jeopardizing the party’s forthcoming national convention as result.

The party, as at today, is in confusion over where to zone the chairmanship and other offices of the new NWC.

It is partly for this rea­son the move to shift the date of the Convention by a few weeks appears to be gaining traction among stakeholders of the party.

In all this, one thing that has remained con­stant from the posturing of political gladiators, according to our source, is the fact that all aspi­rants from the North appears to have accepted the reality that power must rotate South of the country at the expiration of the term of President Muhammadu Buhari.

Information garnered also suggest that most zones in the north have consistently rejected party positions that could injure the ambi­tion of some of the gov­ernors.

For instance, the North Central has all along been tipped to pro­duce the chairman of the new National Work­ing Committee (NWC), which was the reason some of the best names like Senator Umaru Tan­ko Almakura, Senator George Akume, Senator Mohammed Sani Musa,

Turaki Saliu Mus­tapha threw their hats into the ring initially for the party’s National Chairmanship slot.

All that seem to have fizzled out with six days to the proposed Febru­ary 26 National Conven­tion date.

The interest of the zone seems to have changed even as new en­trants for the position of national chairmanship join the race.