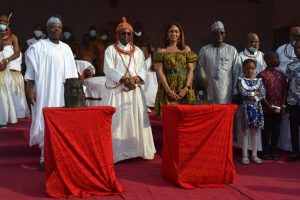 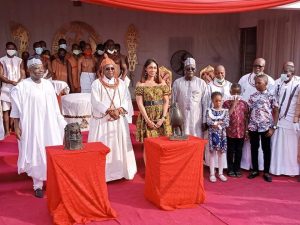 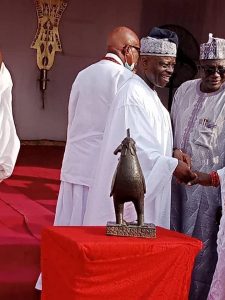 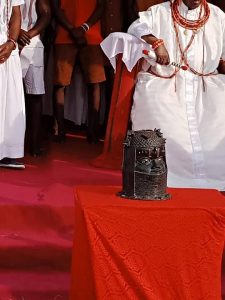 One hundred and twenty five years after they were first looted out of the palace of the Benin, two artefacts; a cockerel (okpa) and Uhunwun Elao (Oba head) were formally handed over to the Oba of Benin, Omo N’Oba N’Edo Uku Akpolokpolo, Ewuare II in an elaborate ceremony in the palace yesterday.

The two artefacts out of about 10,000 which were taken from the palace during the British expedition of 1897 were returned by Jesus College of Cambridge University and University of Aberdeen, Scotland.

The ceremony attracted prominent Benin sons and daughters, members of the royal family, various societies and groups in the kingdom, the Director General, National Commission of Museums and Monuments (NCMM) Professor Abba Tijani, the Nigerian High Commissioner to the United Kingdom, Ambassador Tunji Ishola, traditional rulers from Edo North and Edo Central senatorial districts, representative of the Ooni of Ife, the Hausa and Yoruba communities, the muslim community, men of the various security agencies and others.

While officially handing over the items to Oba Ewuare II, Ambassador Ishola said the two items have been preserved in their original forms when they were taken away 125 years ago and the value of the Cockerel today is £2 million while the Oba head is valued at £500,000.

He said he was delighted that the works would now be domiciled in their homes of origin and researchers would write about them talking to their real owners.

Ishola said the works were returned with its history of who had housed them right from 1897 till date and how much it was sold or bought at each point.

On his part, the Director General of NCMM Professor Abba Tijani said it was historical that the artefacts were returned in his tenure when several attempts in the past were frustrated by the holding countries.

He said “I have on many occasions met the holders and told them that these Benin artefacts are not art works, they are life arts, they are part of the history of these people, they are not works for commercial values or aesthetics, you can imagine that part of your life is taken from you.

“We are making history because none of us were here when they were taken away in 1897 but we are here to receive them. The Commission had made several efforts in the past to see to their return but we encountered many blockades.

Oba Ewuare II in his speech which was read by his younger brother, Prince Aghatise Erediauwa said the day was a day of joy personally “and to all Benin people at home and in Diaspora. We are witnessing today the beginning of the restitution of our artifacts which were looted in 1897.

He said contrary to reports that the military expedition of 1897 was a retaliation for the killing of some British soldiers, “The truth is that there was a calculated and a deliberately conceived plan to attack Benin for its territorial dominance and also for her treasures. The result was a destruction of a civilization which equaled or even surpassed that of the aggressors. It was thought that the kingdom, totally decimated and in ruins in the aftermath of the war, would not rise again. By the grace of God and our Ancestors we are still standing.

“The current conversation is about restitution. International scholars and most museums now agree that keeping stolen items is immoral and illegal. There is consensus now that heritage items must be returned to their place of origin. For this we commend both Jesus College of Cambridge University and the University of Aberdeen for their pace-setting initiative in returning these two bronzes. Of course, there remain a very large number of our artifacts out there. We are aware of the ongoing discussions which the Federal Government, through the National Commission for Museums and Monuments, is holding with various governments on our behalf. We are also aware that the major museums will miss having Benin Bronzes in their collections. I believe that a working arrangement can be agreed whereby our ownership of the artifacts having been established, those museums will continue to enjoy the presence of our artifacts.”

He commended President Buhari for his interest in ensuring the return of the artefacts.

THROWBACK: I would rather die than join APC or bow to Buhari – Fani-Kayode