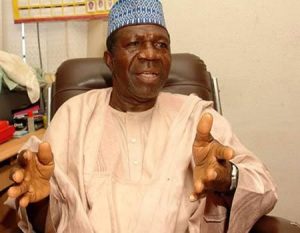 Third Republic Senate President and a member of the National Caucus of the ruling All Progressives Congress (APC) Senator Ameh Ebute, has described Igbo presidential aspirants like Anyim Pius Anyim, Orji Uzor Kalu and others as politicians who are not truly clean because they are contesting one allegation or the other.

Ebute made this disclosure in a recent interview. He insisted that his party, the APC, needs people who are “clean” to contest for the 2023 presidency.

“Now, the presidency is open to all but you see the number of Igbo that have shown interest. You have Okorocha (Rochas), tell me how he can become president? There is Orji Uzor Kalu that has just been freed by the Supreme Court on technical grounds. You have Umahi (Dave), the present governor of Ebonyi State. That one I don’t know about his records. But look at Okorocha and Uzor Kalu. Yes, there are others. Pius Anyim. Pius Anyim has a problem too. We want clean people,” the elder statesman said.

The 2023 Nigerian presidential election will be held on 18 February 2023 (tentative date) to elect the President and Vice President. Incumbent President, Muhammadu Buhari of the APC is term-limited and cannot seek re-election to a third term. The primaries of the major political parties will be scheduled for late 2022 or early 2023.