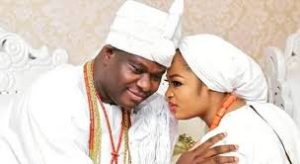 Amid her marital friction, wife of the Ooni of Ife, Silekunola Naomi, says she is “nobody’s ex”.

Infopowerng recalls that Naomi had in December 2021 said that her three-year marriage to the monarch, Adeyeye Ogunwusi, has ended.

Some elders from Ile-Ife, Osun state made a last-minute move to reconcile the couple, while the Ooni too, in an interview with BBC News Yoruba, played down the reports his wife has separated from him.

Taking to her Instastories and Facebook status simultaneously on Tuesday night, the 28-year-old evangelist uploaded a short video of herself after a makeover session.

Playing rhythmically in the background was ‘I Am Beauri’ by Afro-soul singer, Bassey Kenneth, popularly known as Beekay.

The lyrics of the song heard in the video goes thus; I’m a beauri, I be spec, I drip glory, I be nobody’s ex, haters go hate o, potatoes will potate…