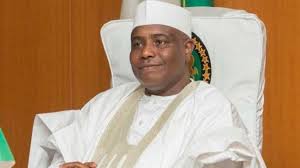 Governor Tambuwal, who is consulting with leaders of PDP across the 36 states of the federation in a bid to emerge as the presidential candidate of PDP for the 2023 presidential election was received by Zamfara State Deputy Governor, Mahdi Aliyu Gasau, as well as the state party leaders including the party chairman.

While speaking, Tambuwal stated that he is in the state to consult with the Zamfara PDP in his quest to become the party’s presidential candidate.

Tambuwal, however, failed to comment on the purported impeachment plan of Zamfara Deputy Governor, saying it is a subject of litigation.

He thanked the PDP leaders for their receptive welcome even in the midst of insecurity in Zamfara, stressing that it’s imperative for leaders of PDP in the state to close ranks so as to take over power in the state come 2023.

Tambuwal also condoled with the people of the state over the killings, kidnapping, and general insecurity in Zamfara.

Mahdi Gusau said he is behind Governor Tambuwal’s presidential ambition.

He urged the governor to carry not only him but also the entire Zamfara PDP along in his quest to become president of Nigeria.

Why my marriage failed – Mo Abudu