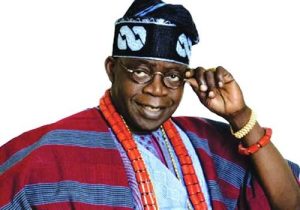 Abdulmumin Jibrin, a former member of the house of representatives, says 14 governors are in support of the presidential bid of Bola Tinubu, a chieftain of the All Progressives Congress (APC).

In a tweet on Friday, Jibrin, who is the director-general of the Bola Tinubu support group council, also said APC chairpersons from 26 states are backing the presidential ambition of the former Lagos governor.

He, however, did not specify which governors or APC state chairpersons have expressed support for Tinubu.

“14 Governors in and 4 in talks. 26 state chairmen in. We will not attack or stop anybody from contesting,” he wrote.

“We exercising our right of choice by promoting Alhaji Asiwaju Bola Ahmed Tinubu. Do same for yours PLS. We will remain gracious and our doors open now and after the victories.”

Tinubu had, in January, announced that he had informed President Muhammadu Buhari of his decision to run for president in 2023.

Before traveling to London last week, Tinubu had also met with political stakeholders to consult on his presidential bid — including Ibrahim Badamasi Babangida (IBB), former military head of state.

Speaking on his decision to contest, the former governor had said becoming Nigeria’s president is his “lifelong ambition”.