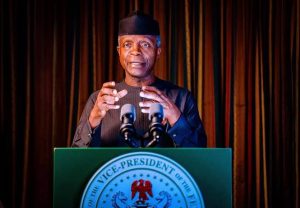 Days after floating an impact assessment report on the Vice-President, Prof Yemi Osinbajo, SAN, a civil society organisation, Identify the Right Leader Initiative, has called on Osinbajo to declare his intention to run for the Presidency in the forthcoming general elections.

According to the group, the future of the country depends on whether Osinbajo decides to run or not as he “ticks all the boxes.”

The group also launched a book titled, ‘The Unveiling: Osinbajo …If empowered’, which highlights his achievements as Attorney-General of Lagos State under the Bola Tinubu-led administration, Vice-President, and on a few occasions, acting President, under the present administration.

The National Coordinator of the group, Princess Temilade Okesanjo, while unveiling the book, said it was now out of the VP’s call to decide whether or not he wanted to run for the exalted seat as “most Nigerians touched by his moves, while he was in different political capacities” wanted him as President of the country to “turn things around for the nation.”

At the event held in Lagos on Friday, Okesanjo said, “It is no longer whether or not he would want to be President. It is out of his call at this moment. Nigeria needs a proactive leader and we have found Osinbanjo to be the best fit for the job at this time, considering his track records and political antecedents. Whether or not he wants to run, he is the next President of Nigeria.

“Interestingly, when we launched this a few days ago, we got on the front pages of newspapers. That was an indication that some people believe in what we are doing. So far, it has been positive. Reading through the comments made by Nigerians, we see that we have a lot of Nigerians, who support us and believe in the vision and have begun to ask how they can be a part of this movement.

“We are tired of recycling the same set of people that we cannot read exactly what they have done. What sort of impact have they made? It is time that I think that people are really tired. We need something different. There is a lot going on and we cannot pretend that the country is what we would have wanted it to be. We need Nigerians to be transparent enough to help this conversation.”

On what the aim of the group was, the Director-General, Mr Dayo Akutobi, said, “We are a civil organisation seeking the wellbeing of the country. We are not a political group. We are non-partisan, not-for-profit, civil-minded, patriotic and unbiased Nigerians, who have taken out time to look at the process of identifying individuals, who are fit for political offices across the country, starting from the seat of the President.”

The group’s Director of Strategy and spokesman, Dr Abimbola Oyarinu, urged Nigerians to look beyond campaign promises made by politicians and consider their track records so that they could identify those fit for particular offices.

In the group’s pamphlet titled, ‘60 Points from Osinbajo’s Project Assessment Report’, the Vice-President was described as “emotionally intelligent, detribalised, highly cerebral, staunch believer of the rule of law and the most active VP since 1979.”