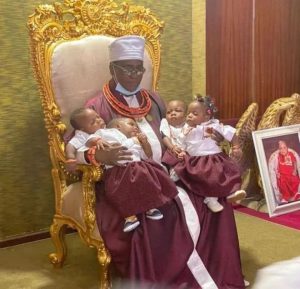 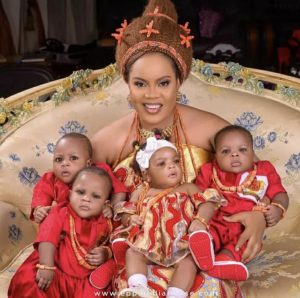 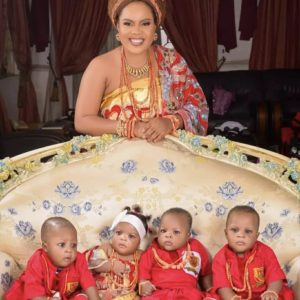 The youngest and Fifth wife of the Benin Monarch, Queen Aisosa Ewuare the Second, became a proud mother on August 6, 2021, when She put to bed a set of quadruplets.

Months after the Quadruplets were added to the Benin Royal Family, the names for the new arrivals were on Saturday unveiled at the Palace of the Benin Monarch, according to its traditions.

Recall that, the palace in the penultimate month of their birth, announced that a date for the naming ceremony will be made public.

Frank Irabor, the Secretary of the Benin Traditional Council, broke the news in a statement made available to newsmen in Benin City, on Friday, the birth of the quadruplets.

Irabor described the birth of the babies as an “unprecedented and historical event” in the Benin Royal family.

A development that drew wide jubilation across all facets of society.

Following the earlier announcement for the naming ceremony, it was all celebrated on Saturday shortly after the names were unveiled.

The set of quadruplets, three boys and a girl, were displayed by members of the royal family alongside the admirable wives of the most respected monarch of the Benin Kingdom to the gallery of the joyous audience who came for the celebration of the quadruplets’ naming ceremony.

Oba Ewuare the Second, is the 40th Oba of Benin Kingdom after succeeding his father to the exalted throne of the Benin Kingdom, on October 20, 2016.

Taliban To Ban Music In Afghanistan