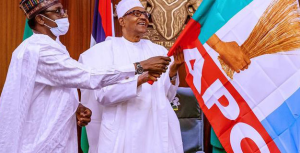 The choice of the next national chairman of the All Progressives Congress (APC) appears to have been narrowed by the Presidency to Mallam Sa­liu Mustapha (MSM), the Turaki of Ilorin, serving Senator Sani Musa, from Niger State, and former governor, Tanko Al-Mak­ura.

As learnt from party sources, the choices were reached by the combi­nation of an agreement within the APC on power sharing and a security re­port believed to have been submitted to President Muhammadu Buhari.

“The report, as we have heard, has a profiling of each of the candidates’ as­sociates, politically and in business; it enquired if the person had pending cases with ICPC, EFCC, or the Code of Conduct Bureau.

“The presidency is wor­ried that a candidate sus­ceptible to blackmail could derail the party ahead of the decisive 2023 general elections,” the source said.

There were also mat­ters, according to the news­paper’s findings, of issues bordering on national se­curity.

“The president doesn’t want anybody that could be linked to the current insecurity in the country,” the source added.

Another source, this time, from the presidency but also close to party hi­erarchy, said that the pres­ident and key stakeholders took seriously matters con­cerning arrangement on power sharing in the party.

He said: “At the incep­tion, it was agreed among the legacy party that berthed APC that CPC bloc would produce the presi­dent after which the ACN bloc would do same.

“But for the national party chairman, it goes to CPC bloc, from where Pres­ident Buhari emerged.

“Under this instance, MSM, Sen. Musa, and Al-Makura appear to be best favoured.

“Akume came from the nPDP bloc and that leaves him out, while Modu Sher­iff had a colourful back­ground after moving from the APP to PDP and then to the APC from where he jumped back into the PDP only to return to APC.”

As already revealed, President Muhammadu Buhari and governors from the party may have reached a consensus on who would emerge as the next national chairman of the party.

Top sources in the rul­ing party disclosed that the decision by the pres­ident and the governors was not unconnected with the division between the governors and other par­ty leaders who are said to be sharply divided on the mode of primary to adopt to elect the third substan­tive national chairman of the party and other execu­tive members.

While some insist on direct primary, some pow­erful forces within the par­ty are bent on the mode, arguing that if the party could adopt direct prima­ry to elect Buhari for sec­ond term election in 2019, the party should adopt the same in February.

Though there are other sources who claimed that top shots of the party, in­cluding governors and those at the presidency, have narrowed down three of the contenders out of the many vying for the chairmanship seat, but a decision would be made in the coming days.

It was learnt that President Bu­hari and some APC gover­nors close to the Villa have narrowed their search to the former governor of Nasarawa State, Tanko Al-Makura.

One of the sources told our correspondent that, “The president and the concerned governors have reached a conclusion on some key positions, such as the Chairman, Secretary, Publicity Secretary, Legal Adviser, because these po­sitions are very key to the success of the party.

“Other positions may be agreed upon through di­rect or indirect primaries, but for these key positions, especially that of the na­tional chairman, the pres­ident is really interested in who occupies that position, and so are the governors.

“I can tell you for a fact that they have concluded on who will become the chairman of the party.

“For the positions of the Secretary, Publicity Secre­tary, and Legal Adviser, the decision will be made in a matter of days.”

Another source said, “Though it is very diffi­cult to read the president’s mind on this, his body lan­guage showed that he has preference for Al-Makura, who was the lone governor produced by the Congress for Progressive Change (CPC).

“And knowing President Muhammadu Buhari very well, he will always reward those who are loyal and dear to him.

“So, I don’t think there is any candidate eyeing the chairmanship position who is more likely to get the position than Al-Mak­ura.”

But mid last year, the EFCC invited Al-Makura and his wife, Mairo, for questioning over allega­tions of breach of trust and misappropriation of funds, allegedly perpetrat­ed during his eight-year tenure as governor. This might be a reference point.

At this point, howev­er, the APC Caretaker Extraordinary Conven­tion Planning Committee (CECPC) is facing what appears a difficult hurdle to rescue the interest of the party from some per­sonal and bloc interests now putting party cohe­sion and unity at risk as the clock ticks to the Feb­ruary 26 date of the par­ty’s National Convention.

Individuals within the CECPC, we gathered, have unwittingly and intricate­ly tied their personal inter­ests on key decisions ahead of the Convention making it very difficult to proceed with open arrangement that guarantees party co­hesion.

For instance, the schem­ing to keep hold of party structures in some states ahead of the Convention, partly the reason why the Caretaker Extraordinary Convention Planning Com­mittee failed all along to delay the Convention, we hear, has continued to pose some difficulty.

It is now an open secret that the CECPC was not planning for any Conven­tion in the month of Feb­ruary prior to the presi­dential directive that led to the prompt convening of the meeting of the Pro­gressive Governors Forum (PGF) last week Sunday.

Prior to the late night decision by the Progres­sive Governors’ Forum on January 16 to come out with a specific date for the party’s National Con­vention, the CECPC had in imitation of the oppo­sition Peoples Democrat­ic Party (PDP), worked hard to avoid open contest during the convention of the party.

One reason is to avoid obvious implosion that may ensue because of the many parallel Congress­es that were conducted in the majority of APC states and maintain a semblance of unity and cohesion in the run to 2023, which is key.

The CECPC, we gath­ered, had worked on a template to settle inter­ests of the various legacy parties that came togeth­er in the merger that led to the formation of the APC.

In practice though, ac­cording to some sources, the CECPC is under the grip of three governors believed to be running dif­ferent agenda.

In consideration of the issues that have burdened the party ahead of the convention, Bishop Funso Awe, the 2019 governorship candidate of the National Conscience Party (NCP), maintained that the APC would not be going into the convention as a unit­ed party and, as such, it would be difficult, if not impossible for it to come out of it united.

Bishop Awe, the Bishop of the Orthodox Anglican Church, Lagos Mainland Diocese as well as the General Secretary, Civil Consciousness Initiative (CCI), noted that the par­ty had been having crises and factions in almost 20 states, wondering how a divided house could pro­duce acceptable national executive for the party overnight.

Awe, who had earlier predicted the party’s im­plosion due to the Buni-led committee’s inability to re­solve all crises in the party since the panel was put in place, stated: “The APC is not going into the con­vention as a united party. I don’t think they will come out of it united. Some peo­ple’s ambition is so much that if their candidates do not get what they want, they will think otherwise, or make trouble.

“The APC is not united. Everything about the con­vention is in the hands of the executive and the leg­islature. The Core North and the Middle Belt are no united.

“The APC will definitely come out of the convention more divided. Its future ex­istence will depend on the person who emerges as the new national chairman and his ability to bring to­gether all the warring or contending forces togeth­er.”

Also speaking, Comrade Aluh Moses Odeh is Na­tional Leader, All Middle Belt Youth Forum (AM­BYF), noted that the APC was “an arrangement” put together to take over power at all cost from the Peoples Democratic Party (PDP), hence immediately the election result of 2015 was announced in its favour, the bubble burst with the party leaders in stiff resis­tance of the emergence of certain individuals as the National Assembly leader­ship.

Odeh, a political activ­ist, stated: “You see, you don’t approbate and repro­bate at the same time. Our politicians do not know the difference between gover­nance and party politics. Why should an elected gov­ernor act as chairman of the party? Was it that there was no individual in Yobe State to do the work; that is if the leader must come from Yobe State?

“I wish they resolve their matter. But, politi­cians are terrible. They can never give up on their greed. The internal crises in APC pose a threat to our democracy.”

Barrister Alaowei E. Cleric, Chairman, Board of Trustees (BoT), Cen­tre for Human Rights and Anti-Corruption Crusade (CHURAC), stated: “I am sure the convention will hold despite the seeming challenges at the moment. The challenges threaten­ing the convention are typical of our political de­velopments and they are surmountable.

“What I am concerned about is the party’s fortune after President Muhamma­du Buhari’s tenure. For me, I do not want APC to succeed APC, or the party producing Buhari’s succes­sor because the party has no good intention for the country.”

However, Dr. Tunde Moses Elebute, a human rights promoter and public affairs analyst said there was no doubt that APC would conduct its national convention.

Elebute, the Deputy Director, Crime Victims Foundation of Nigeria (CRIVIFON), Lagos State chapter, however stressed, “They will hold their con­vention once the money ‘flows plenty plenty’ before the day.

“But, seriously speak­ing, if they are not careful, it could be the beginning of their end.”