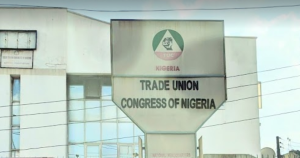 The National Executive Council of the Trade Union Congress TUC has outlined a num­ber of conditions which the Federal Government must meet before it can fully de­regulate the downstream oil sector.

Presiding over the meeting in Abuja, on Saturday, Trade Union Congress President, Quadri Olaleye, said govern­ment has no basis proposing to finally hands off subsidy on Premium Motor Spirit (PMS) when it has not taken into consideration palliatives to over forty millions extreme­ly poor Nigerians.

TUC equally noted that there must be assurances that refineries are fully over­hauled and establishment of modular refineries encour­aged.

They also noted the impact of the Covid-19 Pandemic on the economy, lamenting that while it has resulted in sever­al job losses, there should be concrete policy initiatives by government to generate mass employment.

Recall that an existing ad­hoc committee set up by the National Economic Council NEC, with Governor of Ka­duna State, Nasir El Rufai as chairman, had met severally, where they drafted a report proposing total liberalisation of the downstream oil sector, a development that may shore up the price of PMS from the current N165 to N302 per litre.

While they met at the Presi­dential Villa, Abuja, on Thurs­day, last week, to harmonise their position, Edo State gov­ernor, Godwin Obaseki, had disclosed that the Committee had not yet decided on subsi­dy removal as a timeline of June 2022 still exists before it can be reconsidered.

But among other condi­tions TUC expects govern­ment at the state and federal levels to meet was putting measures in place to amelio­rate the suffering of the peo­ple through food security and infrastructural development.

According to the union, the proposal by National Economic Council on the final removal of subsidy on Premium Motor Spirit (PMS) as from June 2022 should take into consideration the atten­dant economic impact on the economy.

While acknowledging the giant stride in rice produc­tion through various inter­ventions of the Buhari’s ad­ministration, TUC said the federal government should ensure that price of rice in the market become affordable to the common man in order to justify the rice revolution policy of the administration.

They also expects that pri­vatisation of the power sector should be reviewed since the contracts have expired to en­sure viability, job security and effectiveness of the sector.

Olaleye said failure to meet these demands, TUC state ex­ecutives would mobilise for industrial action against the government.

“NEC-in-Session insist that Federal Government MUST ensure that the conditions precedent put forward by the TUC on the deregulation of the downstream such as; the revitalization of existing refineries, establishment of new ones including modular refineries, effective policing of boarders to stem the rate of petroleum products smug­gling, e t c are implemented.