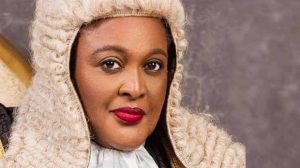 The Nigeria Police Force on Thursday disclosed that one fake Chief Superintendent of Police, CSP Lawrence Ajojo and 14 others have been arrested for allegedly invading Justice Mary Odili’s residence in the Federal Capital Territory, Abuja.

Infopowerng had reported that Justice Mary’s residence was invaded by armed men on October 29, 2021.

The Inspector-General of Police, Usman Alkali Baba, subsequently ordered an investigation into the invasion, vowing that the perpetrators must be brought to book.

Parading the suspects, on Thursday at the Force Criminal Investigation Department, Garki, Abuja the Spokesperson, Commissioner of Police, CP Frank Mba said the suspects involved in the criminal acts came from different professional backgrounds such as journalism, Banking, law enforcement and law.

What Obasanjo Told Me After I Released Him From Detention — Abdulsalami