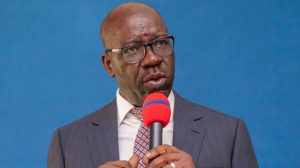 Edo state chapter of the All Progressives Congress (APC) on Tuesday condemned the planned demolition of the over 100 years old Central Hospital in Benin City which space the state government has penciled down for an ultra-modern motor park.

A statement by the State Assistant Publicity Secretary of the APC, Ofure Osehobor lampooned the Governor Godwin Obaseki administration for not improving on the developmental trajectory of the hospital started by his predecessor, Comrade Adams Oshiomhole lamenting the plan to turn the area meant for the second phase of the plan to a motor-park.

But the Commissioner for Information and Orinetation, Andrew Emwanta Esq said the hospital was not being demolished but being relocated adding that there is already the Edo Specialist Hospital in the place.

The APC statement said “The reason advanced by the government for the proposed demolition of the hospital, which is to make way for an ultra-modern Motor Park to decongest the City centre and ultimately generate additional revenue for a State, it has mismanaged its resources, is unacceptable. This is because no right thinking government will prefer to replace a viable health facility, which it should equip and staff, to better cater for the well-being of the people, with a Motor Park.

“Governor Obaseki’s predecessor in office, Comrade Adams Oshiomhole, some years ago, saw the need to modernize the Central Hospital, Benin City and undertook the task of remodeling and reconstructing a large segment of the Hospital and equipping it with world class facilities, during his tenure. It is on record that Mr Obaseki played a major role in this effort as Economic Adviser to his predecessor. President Muhammad Buhari it was who commissioned the completed, ready to use health facility in 2016 and even commended the Comrade for the feat.

He said the governor should study the Benin Masterplan and identify where motor-parks are designated to be and develop them.

Emwanta in the statement said “The hospital is now being relocated to the Stella Obasanjo Hospital which is being expanded and improved to deliver quality health services to Edo people.

“The general public is hereby urged to disregard the propaganda by the opposition in the state that is rudderless and aimed at creating an issue where none exists.”

BREAKING: Bandits kill Policeman, 11 Others During Raid in Kaduna Communities