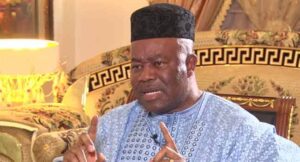 The ongoing forensic audit of Niger Delta Development Commission (NDDC) has uncovered 12,128 abandoned projects without a trace of contractors who the jobs were awarded to, Minister of Niger Delta Affairs Godswill Akpabio, has disclosed.

The Minister said the interim report of the forensic verification exercise has been revealing, adding that the “Interim reports of the forensic verification exercise have been revealing, adding that, “the process has been transparent, we listed 9,080 projects to be considered in the verification process but in less than three months the report so far shows that 12,128 projects has been discovered as abandoned projects with no specific ownership attached to.”

Akpabio who made the disclosure while hosting the United Nations Deputy Secretary-General, Hajia Amina Mohammed, who paid a courtesy visit to his office, maintained that, ““most of these abandoned projects have become sanctuaries to criminals. Projects were embarked on without consultations.

“There was no initial coordination. So, as part of its mandate, the Ministry has adopted a program called “Strategic Implementation Work plan” which will coordinate the activities of development partners and stakeholders to prevent duplication of projects in the region.”

The Minister revealed further that, “since the discovery of crude oil in the region 1956, several interventionist agencies had been set up to address the social and environmental degradation of the area, but they all failed to provide the needed succor to the people. In other to address the situation, the present administration decided to set up a forensic auditing process to access and evaluate the achievements that have been made by NDDC in the region since its existence”.

He however observed the Niger Delta region remains the most peaceful region in Nigeria and seeks collaboration with the United Nations to maintain the prevailing peace and development, adding that the Ministry is developing a programme ‘Catch them young’ “where young people in primary and secondary schools are enlightened on the importance of peace and the dangers of destroying oil installations, which has a serious impact on the ecosystem and the nation’s economy.”

In her response, Mohammed stated that issues bordering on the Niger Delta region are peculiar to the heart of the UN and would do everything within UN programmes to address all issues of disillusionment in people’s expectations.

She commended the efforts of the Federal Government and the Ministry over the way they have handled the affairs of the Niger Delta, reiterating the need to maintain peace and stability in the region, noting that “without peace there cannot be any meaningful development, especially when the aspirations and rights of the people are not recognized.”

In his welcome address, the Permanent Secretary of the Ministry, Dr. Babayo Ardo, said that the Ministry is charged with the responsibility of ensuring developmental programmes and supervises the NDDC.

According to him, the Ministry as part of its mandate over the years has provided infrastructure and high impact programmes for youths and women in the Niger Delta region, adding that the Ministry is willing to collaborate with the UN system in actualizing its programmes.