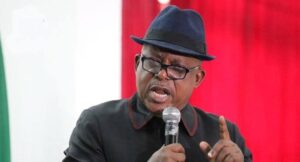 A member of the House of Representatives, Rimamnde Shawulu, Thursday called on the National Chairman of the People’s Democratic Party, PDP to resign from his position with immediate effect, for failing to stanch the flow of defections from the party to the ruling All Progressives Congress, APC.

The lawmaker urged Secondus to throw in the towel before the next general elections, because of his failure to stop the gale of defections from PDP.

In a letter he wrote to a Secondus entitled: “In the Interest of our Party, Democracy and the People of Nigeria: Time To Do The Needful”, Shawulu pointedly told the Chairman to resign.

“I plead with you sir to show leadership today and in the interest of the party, your good name, and the future of Nigeria to resign immediately as National Chairman”, he said.

According to the lawmaker from Taraba State, “Today, not unexpectedly, four members of the House of Representatives from Zamfara State denounced the Peoples Democratic Party (PDP) and defected to the ruling All Progressive Congress (APC).

Unlike other times, when leaders of the party in the House (both the Minority Caucus Leadership and the House PDP Caucus Leadership), put up some form of protest, not a whisper was heard or a hand raised in protest against the decamping!

Our Leader, Sir, I write this letter with a heavy heart; and with the deepest regard for your office and your person, no one can doubt that you have made your contributions to the growth of the party.

Sir not much use will be served in going down memory lane on the formation of the PDP, your contributions to the party and the sacrifices you and other leaders have made. Indeed, when the Governor of Rivers State HE Nyesome Wike sought the support of members of the House of Representatives for your candidacy of the National Chairmanship of the Party, he extolled your virtues of tenacity and commitment to the party and our hope, then, to win the 2019 elections.

He said you were the most experienced and loyal person who would commit everything to the success of the party. Indeed, and according to him, the relentless pursuit of success would be the guide of your actions.

“The PDP, as you very well know, ought to represent the hope of Nigerians for a new future and to, at the very least, provide some formidable resistance and pull from the brink that the APC government has tragically brought Nigeria to.

Unfortunately, the increasing weakness, incoherence, and daily loss of membership of our party to the ruling party have contributed to the general feeling of hopelessness in the country.

The populace has now begun to feel that we don’t have the capacity to take over the reins of power from the ruling party. To put it bluntly, in a presidential democracy, a strong opposition party is necessary to provide a viable alternative to the governing party.

Our party is failing in this regard. We don’t need a soothsayer to know that as our party weakens or its leadership abandons pressing issues to embark on trips to ‘Afghanistan’ such as last week’s protests against Loretta’s Onochie’s nomination as a commissioner of INEC, more members will be tempted to leave the party to secure their political future.

Some will be too discouraged to fight the unconstitutional acts and brazen illegalities being perpetrated by the ruling party as the reign of terror and insecurity envelope the country, while vast swathes of land are being taken over by bandits and ISWAP Boko Haram, who are already setting up forms of governance in some part of the country.

Most dangerous for everyone, including our party, is the fact that more people will become despondent and resort to self-help and or line up behind thugs and local warlords.

“Dear Chairman, Sir, events in the last two years call for sober reflection and sacrifices by both the leadership and membership of the party and it is necessary you set the ball rolling so that the party will come back to life and be seen as a viable alternative to the ruinous APC.

Then, will its doors be seen to be open to the millions that want to come into the party to mobilize Nigerians to take back the country from the iniquitous forces that have seized it by the jugular?

This was the obvious wish of the opinion of party members and leaders when Dr Adamu Muazu resigned as Chairman of the party. Your good self took over to enable the party to regain momentum.

Presently, without discounting the efforts and sacrifices you have made, it is obvious that our party is in far worse circumstances than when Alhaji Adamu Muazu fled the scene.

You cannot fail to note that our party lost both the 2015 and 2019 elections, and we have fewer members in the National Assembly than we had in 2015.

And, as well, our outing during the 2019 National Assembly leadership contest was so disastrous that even members of the public may be wondering whether our party still has members in the House of Representatives and the Senate.

Besides the gale of defections from the party which may continue to haunt us, our party is so divided in many states that without reconciliation we may not stand any realistic chance of winning the forthcoming elections.

One is wont to dismiss as idle prattle rumours making the rounds that some at the highest levels of our party have been “settled” or compromised such as to make the PDP unelectable.

But in politics perception no matter how wrong-headed often drives reality and even rather outlandish conspiracy theories will gain more traction with more defections of governors or of members of the National Assembly to the APC, which given the havoc it has inflicted on the country ought to be the party on the run.

In several of our cultures in Nigeria, leaders who lead their people into disastrous circumstances commit suicide! Sir, history calls and beckons on you to do the needful, not to die but to live for the party by surrendering leadership, in order for reconciliation and repositioning of the party to begin in earnest for a fresh start. You, and indeed, all members of the National Working Committee should make such a sacrifice in the interest of the PDP, Nigeria and democracy.

I plead with you sir to show leadership today and in the interest of the party, your good name, and the future of Nigeria to resign immediately as National Chairman.

“The 2023 elections are just two years away, with a few off-cycle governorship elections in a few states getting underway in a few months, the party needs time to reorganize, reconcile feuding members and prepare to campaign with well-prepared and articulated programmes to rescue Nigeria from the present morass.

It bears restating that time is not on our side. You and the current national working committee members will be unable to lead the reconciliation process because you are unfortunately enmeshed in several current controversies.

My Chairman, Sir, I come in peace, and do know that God will lead you aright if you ask him to!”.

2023: Why we disqualified two aspirants – Mark