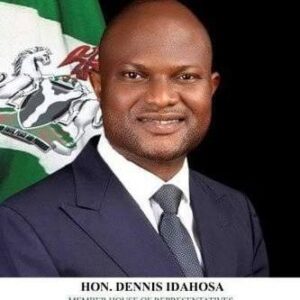 Hon. Dennis Idahosa, a member of the House of Representatives, has said that the passage of the Petroleum Industry Bill (PIB) by the National Assembly (NASS), would engender global competitiveness in the Nigeria oil industry.

Idahosa who represents the Ovia Federal Constituency, stated this in a press statement by his media aide, Friday Aghedo and made available to newsmen in Benin on Saturday.

Idahosa who is the House Committee Chairman on Legislative Compliance, said that development in the nation’s oil industry had been hampered and bedeviled over failure to enthroned competitiveness in the industry.

He noted that with the passage of the bill by both Chambers, not only the players will be the beneficiaries, but the country and the people in general.

According to him, “I must first of all commend both chamber of the NASS for making true it promise to pass the bill within the life span of the 9th assembly.

“Not only is the bill passed, but the encumbrances that had stood in the way of failure to pass and the bill assented to by the previous assembly, were dealt with; the all encompassing bill had the inputs of all stakeholders.

“Again, like i have always said, working in tandem with the executive is a sure way for Nigerians to enjoy the dividends of democracy, this have been clearedly demonstrated by the 9th assembly.

“We don’t need to rock the boat to make a statement, ours is to see that the people we represent get what is due them. So, we will continue to work in harmonious relationship with the executive and always point out their areas of default.

It would be recalled that the NASS, on Thursday, passed the PIB that had been in the front burner of the nation’s lawmakers since 1999.