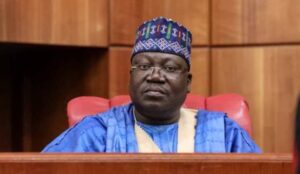 President of the Senate, Ahmed Lawan, on Tuesday, decried the spate of killings of Nigerians across the country occasioned by growing security challenge.

He expressed his dissaffection on the floor of the chamber in his concluding remarks after the Senate had observed a minute silence, six times, in honour of certain Nigerians who lost their lives.

Amongst those the Red Chamber held one-minute silence six times during plenary to honour were Ahmed Gulak, former Presidential Adviser on Political Matters to former President, Dr Goodluck Jonathan; the late Chief of Army Staff, General Ibrahim Attahiru who died penultimate week in a plane crash; citizens killed by bandits in Niger state and those who lost their lives to gas explosions and boat accident in Ogun and Kebbi states, respectively.

The President of the Senate said the National Assembly was determined to step-up legislative interventions to protect Nigerians against the heightening spate of insecurity in the country.

He said: “Let me observe that we have observed about six one-minute silences and most of it was to pray for the repose of the souls of Nigerians who were murdered or killed by criminals.

“It is very important that we step up our legislative intervention in ensuring that we protect the lives and properties of Nigerians to reduce the incidence of one-minute silence.

“I believe that the Senate and, indeed, the National Assembly, working together with the Executive and getting the support of Nigerians, we can bring the much needed succor to our people, and that is why we are here.”

Ecstasy in Edo as Oba Of Benin Welcomes Quadruplets

Brymo says 2Face Idibia Accused Him Of Sleeping With His Wife