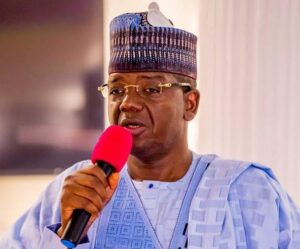 Governor Bello Matawalle of Zamfara State has approved the suspension of the Emir of Dansadau, Hussaini Umar, as well as the District Head of Nasarawa Mailayi, Bello Wakkala, over alleged ties with bandits in the state.

The suspensions, according to a statement on Monday by the governor’s media aide, Zailani Bappa, was with immediate effect.

According to the statement, the governor also directed the District Head of Dansadau, Nasiru Muhammad S/Kudu, to oversee the affairs of the Emirate.

“Similarly, the District Head of Nasarawa Mailayi Alhaji Bello Wakkala has been suspended from Office. His suspension is also with immediate effect,” the statement added.

Meanwhile, the governor has approved the constitution of a high-powered committee of some credible personalities to investigate the activities of the suspended traditional title holders of Dansadau and Nassarawa Mailayi.

“His Excellency also wishes to re-iterate the order that Government Security agencies are to effectively implement the presidential order to shoot any bandit, person or group seen with guns other than those approved to lawfully carry guns,” the statement noted.