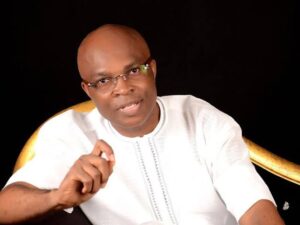 Full Text of An Address Delivered by Barrister Kenneth Imansuangbon on the Esan Leadership Question at Ewohimi, Esan South East Local Government Area of Edo state on the 29th/5/2021

I heartily welcome you to this 2-day Summit tagged: “Esan Leadership Question; Matters Arising,” and the organizers of the summit has mandated me to speak on the topic; ‘Esan Political Future, Any Reason to be Hopeful?”

This question begs for answers from all well-meaning Esan sons and daughters, not just me. Well, I must confess I took interest in this summit immediately the organizer sounded it to me because it is in my view that these types of discuss should suffice regularly to help us continue to define our homogeneous unity as a people.

At this juncture therefore, I want to say a big thank you to the founder of The Chronicle Magazine; Mr. Timothy Okogie and all of those who made today possible.

It is easy to identify the Esan spirit anywhere you see one because we are one, the best, in my own opinion, created by God Almighty. So I am saying in strong, affirmative words that the political future of our people is bright and hopeful.

We can just recall back to contemporary history to accentuate this fact. It is believed by many historians that the Esan people are originally from Bini where they left in search of food, security, their welfare among other reasons. And this is believable as there is historical synchrony between the two peoples politically and culturally – I mean to say the Binis and Esans and in extension, the Owans and Afemais.

Without necessarily calling this list in chronological order, the endless list of great Esan people who have etched their names on the Nigeria history is lengthy: Late Chief Ogbidi Okogie of Uromi (1857-1944) comes to mind, he was a great nationalist, freedom fighter and one of the greatest rulers of his people. Late Chief Anthony Enahoro, also from Uromi, was the man who raised the motion for independence at a young age; his place in the Nigerian history is secured. His motion galvanized what would eventually end the colonial mandate. Then we have Prof. Ambrose Folorunsho Ali; the former governor of the then Bendel State who founded Ambrose Ali University. We have Bishop Patrick Ekpu, Late Festus Iyayi, Cardinal Olubunmi Okogie, Late Stella Obasanjo; the former first lady, Late Sunny Okosun, Late Rare Admiral Augutus Aikhomu; who was the de- facto vice president under General Babaginda, Chief Tom Ikimi; one time foreign affairs minister, Ordia Ofeimu; a poet and polemicist, author of books on political essays and cultural politics. Late Chief Anthony Anenih; a political maetro in his own right. Prof. Oseremen Osunbor. And lately, we have Dr. Oseremen Veronica Okolo, gladly from Ewohimi, who was recently appointed as top Covid 19 policy advisor to the Biden administration.

The list of notable personalities from Esan, both from history and at present, is endless and this gives me the affirmative assurance that the future is hopeful politically.

It will be more sufficient, in my opinion, if our gathering today, achieves the evocation of that assurance, that needs the reconciliation of great minds, a celebration of our identity and origin as Esan people, and an opening up of collective harmony for bargaining, for interrogation, for retrospection, to know what concept we need to drop and what needs to be researched for our own good, which will help foster our political union and quest.

It will remain deeply pleasing if this gathering marks a response to our political question. That is, if this would act as a collective impulse carrying out some brief moments for reflections. We must use this opportunity to act as demand for action and to crush all negativities that might arise in us. We must bask in what I will here refer to the Esan Hope, better still, the Esan Unity – that is akugbe-ahu.

Even as many today talk about the Esan Agenda, I make bold to say that what the Esans are clamouring for is the Edo state agenda that is fairness, equity and justice which will guarantee peace and development. Let emulate our sister state like Delta where power is rotated among three senatorial districts.

And that is why there is the need to reposition our political attitudes, replacing complacency with rededication, a task that must be accomplished by not only those of us that are seated here today, but all Esans home and abroad.

When the organizers of this summit called me, the prospect of the Esan gathering provoked in me an alertness of current meaningful and possible actualities, the realities that exhibits the very political provocations I have always wished for. In no small measure, there was an immediate arousal, a need for this gathering, a gathering beyond mere wishes but an expansion of our collective will. At least, I couldn’t curtail my joy when I saw the list of those to grace the 2-day summit.

I am not in doubt that we would be able to harmonize our political spaces through our cultural uniqueness. In short, this project should be for the eradication of our collective fears and differences as a people with passive complicity.

We must use this opportunity to take hold of our political future judging from the exploits of our past leaders. Our homogeneous uniqueness is a privilege and we must tap into the fraternal harmony.

We must harp on harmonizing our political cultures, partner in optimistic ventures and rebuke the nominal failure of division between us. Our responsibility should not end with rhetoric about leadership or compromise if we must attain our political goals.

Esan is made up of about 35 kingdoms and we are predominantly farmers due to the arable land. Today, it is unfortunate that our farmers can no longer comfortably go to their farms in their ancestral lands without harbouring the fear of being killed or their wives being raped or kidnapped.

It should be noted that the average Esan man is a fighter, a warrior, a hunter and we were once mercenaries. We shall overcome the security situation in our land if we continue to meet like this to find collective solutions to our surmountable challenges. I humbly call on all Esan people and the entire good people of Edo state to support Governor Obaseki ‘s good initiative on security in Esanland and the entire Edo State.

As we tie our economics to politics since both are Siamese twins that cannot be separated, we must ask ourselves how Esan people fared since 1999. I mean since this contemporary political dispensation. During this era, we have had three ministers; Chief Tony Anenih, who was Minister of Works and Housing from 1999 to 2003, we had Chief Mike Onolememen, who was also the same minister from 2011 to 2015 and before then, we had Elder Odion Ugbesia, who was Minister of Solid Minerals in 2003. And then we had Prof Osaremen Osunbor, who was the governor of Edo State between 2007 and 2008. Apart from these, I am not sure the Esan people have attained more politically in recent times.

We must interrogate the reason why we have not made impactful inroads since then. And this is why the sacrosanctity of 2024 governorship position coming to Esan should not be traded for piece meals.

The Esan interest come 2024 is the Edo interest. We must therefore jointly protect this interest. We must not for any reason demean ourselves or try to cast aspersions against our brothers for political gains.

We must all come together like this to protect this Esan interest; we are jointly going to demand as part of negotiations with other peoples of the state. Yes, there is hope – we shall negotiate in our favour, but we have to put our house in order first as Esan people.

We have in the course of history stepped down through negotiations for others, it’s time for reciprocity. We have an army of talents that we can fetch from when the time comes.

There should be private talks within our Esan caucuses to actualize our political unity as a people with common interest. Never again shall we become complicit. It will be a sealed indictment against us if this gathering ends up in talks without actions. It will be an act of wasted effort and moral liability on all of us, especially this very generation.

As leaders and followers, we cannot cease to recognize and embrace our mission of leading and following the people right politically. Let words and actions, act at the very least, be used to mobilize towards the fulfilment of responsibilities by those who are charged with leadership or else,we shall be branded as collaborators and accomplices if we abandon our duties to the Esan people.

Can we go into political extinction as a people? The answer is before us. We can grow if we convoke more of these kinds of unions to talk, and we can as well go down if we are divided, the choice is before us today. Every generation has their obstacles and challenges, if they have the will, they will surmount them. We must therefore rise today and call this the Ewohimi Declaration. Let’s rise up now and declare that 2024 is sacrosanct with the blessings of God and approval of men.