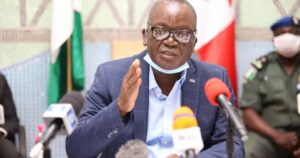 Governor Samuel Ortom of Benue State weekend said though the state was under siege of armed herdsmen, there was no need for anyone to cry or complain anymore except to stand up and defend his or herself.

He said the people of the state have had enough of the killings, sacking and looting of communities stressing that even Israel, the chosen heritage of God would not allow her people to be killed in such a manner without defence.

He was reacting to the surge in the spate of attacks and killings in parts of the state by armed herdsmen militia, the displacement of farmers in the state and the danger it posed to food security in the country.

Lamenting, the Governor pointed out that “already over 100 of villages in Benue State have been sacked and over one million of our people displaced by the marauding herdsmen which portends danger for our state which is the Food Basket of the Nation.

“At the moment we are facing a serious food crisis since our farmers can no longer go to the farms to cultivate their crops because they are being killed by these terrorists.

While calling on the people of the state to jettison partisanship and join hands with his government to salvage the state from the invaders, the Governor urged patriotic Nigerians to speak up against the ills tearing the country apart.

He also pointed out that support and synergy with security agents was imperative in the fight against the worsening insecurity in the country, adding that all hands must be on deck to salvage the country.

Story Of Olumba Olumba Obu, The Man That Proclaimed Himself To Be God In Human Form