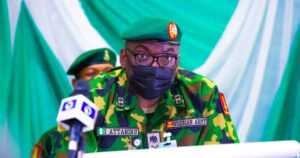 Sources said that because there is no vacuum in the military and due to the fact the unfortunate crash occurred during weekend, the next COAS might by appointed by the Commander-in- Chief, President Muhammadu Buhari, latest Monday or Tuesday.

According to a source in the military, the President already has five names that are being screened for the job, as all five had performed creditably in their current positions.

The list is said to include two serving General Officers Commanding, GOCs, a former Force Commander, Multi-National Joint Task Force, a Corps Commander and another Major-General and former GOC who was redeployed by the late COAS.

Though the source declined giving more details that will narrow down the officers involved, it was gathered that the Generals involved are Course 37 and 38 officers because by statute, since late General Attahiru was Course 35, his seniors are expected to either retire or get redeployed to Defence headquarters.

On assumption of office as Chief of Army Staff, many of former COAS (Lt. Gen Tukur Buratai’s) course mates and seniors to General Ibrahim Attahiru were either retired or redeployed to the Defence headquarters, or the Nigerian Army Resource Centre as directing staff/senior fellows.

However, by tradition, the next most senior officer to the late Chief of Army Staff is the Chief of Policy and Plans, Nigerian Army, a position currently held being held by Major- General Benjamin Ahanotu from Anambra State. He superintended the burial ceremony of his former boss, Attahiru and is expected to act in the interim, pending appointment of a substantive Chief of Army Staff by President Muhammadu Buhari.