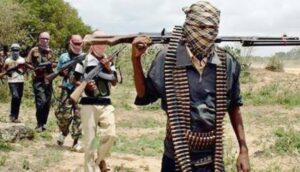 It was learnt that the bandits attacked Libale community in Nasko, Magama local government area but met with heavy military resistance

This resulted into exchange of fire between the bandits and the military.

A security source said that two military men were killed in the attack while several other people were injured.

However, there is no information as to how many bandits were injured or killed in the exchange of fire.

A resident in the Village said that the bandits ran into ‘mountain Libale’ which is a popular mountain in the community.