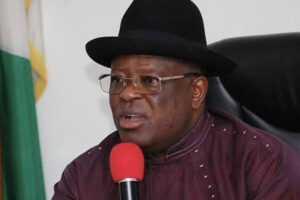 Gunmen launched a fresh attack on a police formation in Ebonyi on Thursday, leaving an operative dead.

Odah said the gunmen invaded the station in their numbers in the early hours of the day and started shooting sporadically.

An eyewitness, Mr Emmanuel Onuh, said the attackers invaded the station around 3am and began to set some parts of the building on fire.

“They shot one inspector dead and burnt down the office of the Divisional Police Officer and Administrative Block.

What you should know about Pastor Adeboye’s late son

What you should know about Pastor Adeboye’s late son

Apostle Suleman, Others Are Hushpuppi On Pulpit — Tunde Bakare