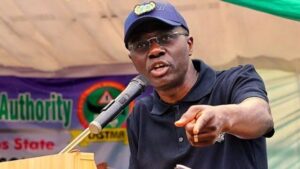 The Lagos State Government has warned foreigners against disobeying guidelines put in place to curb the spread of coronavirus in Lagos State and Nigeria.

In a statement by the Lagos Commissioner for Health, Prof Akin Abayomi, the state threatened to forward the passports of the defaulting indigenous passengers to appropriate authorities for deactivation.

It also said defaulting foreigners may be subject to deportation

Part of the statement read, “Lagos State is set to take steps to prevent another wave of COVID-19, following the flattening of the second wave.

“The trigger for the third wave in Lagos is likely to be the importation of new COVID strains from inbound travelers.

“On the authority of Mr. Governor, who is the Incident Commander, immediate measures to fully enforce the protocol just announced by the Federal Government will be adopted for every inbound person which includes banning entry to non-Nigerian passengers who have been in Brazil, India or Turkey in the last fortnight due to concerns over the spread of coronavirus in those three nations.

“I have hence instructed that all these protocols would be made more stringent to protect the residents of Lagos State from an impending third wave.

“Anyone found to have either broken this rule or supplied a fake phone number or address in a bid to escape the laid down protocols will be identified and made to mandatorily isolate at any of our government or Public-Private Partnership isolation centers or identified hotels for 10 days at their cost, in addition to a stipulated fine.

“As per current Federal Government regulations, the passports of the indigenous passengers will also be forwarded to the authorities for deactivation and foreigners may be subject to deportation.

“Passengers that are anxious to come out of isolation before day 7 will be given options for earlier testing. Whilst in isolation, passengers will have access to our healthcare professionals and will also have our COVID CarePacks delivered, if required – at no additional cost.”

Lagos residents were also urged not to assume the worst is over by going on without adhering to any precautionary measures.

It added, “Residents are still advised to stick to the laid down protocols of always wearing facemasks in public gatherings, washing of hands and maintaining social distancing, even after receiving the vaccine.

“International experience is demonstrating that vaccination is one of the strongest tenets of mitigation against successive waves in other countries. This would be done in conjunction with the Federal Government and following all approvals and validation by NAFDAC and all other relevant bodies.”