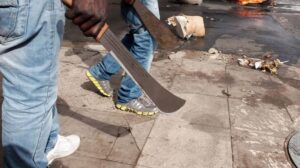 A bloody clash between two rival cult groups has left one person dead and many injured in Yenagoa, Bayelsa State capital.

It was yet to be identified which cult groups were involved in the clash.

Eyewitnesses, however, claimed the suspected cult members, who filed out in large number from within Yenagoa metropolis, headed for Obele where the bloody clash ensued.

It was learnt during the clash at Obele, a suburb of Yenagoa, an unidentified man was killed and some persons were injured.

It was also learnt on their way to Obele, the hoodlums who were armed with axes, guns, machetes and other dangerous weapons, shut down business activities at Amarata and other adjoining areas, shooting indiscriminately and terrorising residents.

An eyewitness, Isaiah, said the incident happened on Monday.

The witness said a certain cult group came in their droves and forced shop owners in Amarata to shut down as they released volley of bullets into the air to prove they were in for serious operations.

He said though the cult members did not harm anybody in Amarata area, they created panic in the area, a situation that forced residents to scamper for safety amid confusion and chaos.

He said after they had succeeded in creating panic, the hoodlums who operated with impunity, left the area and stormed Obele where they killed a resident and injured other persons.

Bayelsa Police Command confirmed the incident, saying it was cult-related.

Spokesman for the Command, Asinim Butswat, said one person was killed during the clash in Obele area of the state capital.

10 Facts You Should Know About Ramadan