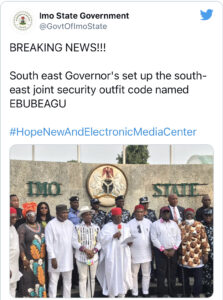 Governors from the South-East geo-political zone has announced the formation of its own regional security.

The new outfit, according to the government of Imo State where the leaders met on Sunday, is known as Ebubeagu.

The meeting which also had in attendance Navy and Air Force Commanders, the Inspector-General of Police, Ohanaeze Ndigbo and other stakeholders.

This is coming a year after a similar outfit was formed by governors of the South-West region, naming theirs Amotekun.

Look out for moon of Ramadan from Monday – Sultan of Sokoto