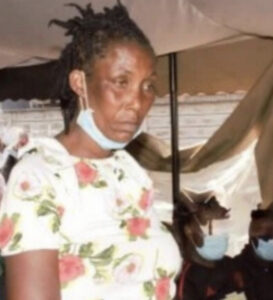 A Kenya lady named Lucy Njeri was captured and charged at the Makadara Law Court for purportedly pouring acid on her partner, whom she said she was not, at this point wedded to.

According to the evidence provided in court by the complainant, she claimed that she had lost confidence in her husband a long time earlier and anytime they meet in bed, his thing triggers her extreme pain because it is too large for her and no lady can handle it.

She said that as she grew exhausted, she packed her things and left his place, promising him that she would not be returning, but the man proceeded to visit her at her home to check on her, ignoring her constant threats to him not to return.

However, it was discovered that on the day she spilled acid on her former partner, her husband, Geoffrey Nyebere, went to her house about 10 p.m. on January 16th, 2021 and began knocking on the woman’s fence.

Lucy said that she was in bed with her boyfriend and declined to open the door for him, as well as ordering him to leave the building, but the man didn’t listen and kept knocking, so she opened her window and spilled acid on his chest, seriously disfiguring the man’s face.

As residents began to crowd while the man yelled in agony, the woman escaped with her lover, only to be caught the following day, as her ex-husband was rushed to the hospital for care.