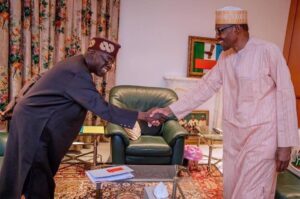 President Muhammadu Buhari, will chair the colloquium to celebrate the 69th birthday of All Progressives Congress National Leader, Bola Tinubu.

It was gathered that the President will preside virtually over the event organised by the office of the Vice-President, Yemi Osinbajo.

The theme of the colloquium is, ‘Our Common Bond, Our Common Wealth: The Imperative Of National Cohesion For Growth And Prosperity’.

The event, the 12th in the series of the Bola Tinubu Colloquium, will hold virtually on Monday, March 29, 2021.

The relationship between Buhari and Tinubu has been a subject of public discourse of late, especially as the 2023 presidential election gets closer.

Political analysts have rumoured the presidential ambition of the former governor of Lagos State but some chieftains in the South-West tenaciously believe that the old general from Daura will not hand over power to the Jagaban of Bourdillon.

The nonagenarian had said, “I have said it openly before and I would say it again that Buhari is deceiving Tinubu and Tinubu is deceiving Buhari. I’m an old man and I’m a funeral candidate already, so quote me. If Tinubu contests the primary in APC today, he will fail.”

“People talk about an agreement between them, but Buhari is deceiving him and he (Buhari) has an agenda of his own,” the new Afenifere leader had added.

“We are coming for you”, Army Chief to Igboho, Dokubo, others

“We are coming for you”, Army Chief to Igboho, Dokubo, others

See How EFCC Chairman, Bawa Slumped While Speaking At An Event In Aso Rock [VIDEO]