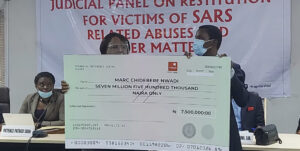 A victim of police abuse has been awarded N7.5 million by the Lagos Judicial Panel on Friday for the ordeal he went through.

Chidiebere Nwadi was arrested on his first day in Lagos in 1999 and was detained. He was thereafter remanded in prison where he spent six years without any offence, charge or trial against him.

He was 18 years at the time of arrest and was in prison up till 2004, six years after. Mr Nwadi, now 40, said he wasted his prime age in the prison.

The petitioner, who first appeared before the panel on November 28, 2020, narrated that he was detained and tortured by police officers hours after he arrived the state from the South-east in 1999.

He left Abia state in May 1999 to see his brother in Lagos, but on arrival, he said he had no means to contact his brother and was stranded before his encounter with the police.

“I arrived in Lagos at 8 p.m. and was heading to Desert Street, Egbeda. It was late, at about 9:30 p.m. When I got there, I was told my brother no longer lived there. The new occupants (a barbershop) didn’t know my brother’s new address.

“I begged them to allow me to sleep in the shop and I slept there till in the morning. I carried my Marlboro bag with me, trying to get to Ojuelegba from Oshodi to meet an uncle who could help, then a van drove by.

“People ran, but I was confused and before I could react, I was grabbed, beaten, and my head was hit with the butt of a gun. When I asked what I did, I was beaten and later taken to Idimu police station along with others,” he said.

Mr Nwadi said he was detained for three months at the police cell because he could not provide a sum of N10,000 allegedly demanded by the police.

He told the panel that he was taken to a nearby court where he was charged with armed robbery and sent to Kirikiri Medium Prison.

“After three years, I developed partial blindness and deafness from the slaps I received. I did not know that telling the police you have no money makes them more angry.”

The victim said he was released in 2004 with help from a missionary from the Catholic church.

Giving her ruling on Mr Nwadi’s case on Friday, Doris Okuwobi, a retired judge heading the panel, said they found that the petitioner was tortured and abused by officers of the Nigerian Police at different times without any justification.

“The duration of his stay for six years on awaiting, trial was not justifiable, is inhumane and the failure of the system,” Mrs Okuwobi said.

The retired judge said the petitioner was incarcerated by the Nigerian Police Force at the prime of his life without justification for six years and was never tried for a crime.

“For a long six years stay in prison and losing a vital part of his youth and opportunities, we hereby give an award of N7.5 million in favour of the petitioner,” the retired judge ruled.

Giving recommendations, the panel said the officers involved in the case be sanctioned by the police force and suspended for six months without pay.

Mrs Okuwobi added that the police should stick to the time frame stipulated by the law for the detention of suspects and curb cases of bribery in the police force.

“It should be the duty of the arresting officers to ensure that relatives of arrested persons are made aware of their arrests and circumstances surrounding the arrest,” she said.