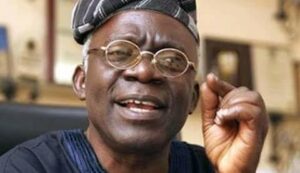 He, therefore, faulted the Federal Government’s plan to use the recently recovered £4.2m to construct Lagos-Ibadan Expressway, Abuja-Kano railway and other federal projects.

“The money confiscated from Governor Diepreye Alamieyesigha in the United Kingdom was recovered by the Federal Government, repatriated to Nigeria and remitted to the account of Bayelsa State Government.

The Attorney-General of the Federation, Abubakar Malami (SAN), had said one of the reasons the recovered loot could not be given to the Delta State Government was that part of the conditions for the repatriation of the fund was that it would be used for certain projects.

He said this agreement had also been backed by a Memorandum of Understanding.

Responding, however, Falana said, “The memorandum of understanding signed by the representatives of the British Government and the Federal Government cannot supersede the constitution which has prohibited any form of discrimination in the country.

“In other words, by virtue of Section 42 of the constitution the governments and people of Plateau, Bayelsa and Delta States are entitled to equal rights and opportunities.

UK suspends recruitment of doctors, nurses from Nigeria, 46 other countries

UK suspends recruitment of doctors, nurses from Nigeria, 46 other countries