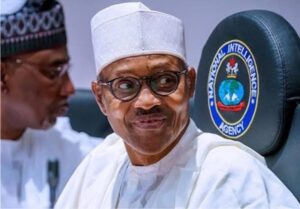 16th President of the United States.

President Mohammedu Buhari is running Nigeria like a conquered territory. He is not just a tribalist ,I have never seen a Nigerian President that has practised Nepotism and Clanism as Buhari has done .It is so bad that criminal elements Kidnapping Nigerians on the High Way are treated with kid gloves,just because they are Northerners .The Minister of Defence with out any iota shame left in him is asking Nigerians to defend themselves ,thereby encouraging the establishment of Local Militias ,that we may not be able to Control .

The Federal Character Principle in Nigeria is a fraud , contrived to protect the strong and oppress the weak .The North has cornered all the Offices of the Service Chiefs ,the Heads of Security Agencies ,Major Parastatals like NNPC,NPA,NIMISA,etc.

When the Tenure of Office of a Southern DG or MD of a Federal Parastatal expires ,it is mostly not renewed and he or she is replaced by a Northern one ,but when it is a Northen MD or DG ,it is renewed immediately. Look at the way the first Chief Justice of Nigeria from the South since 1987 -Justice Walter Onnoghen was forced out of Office ,the same way Valerie Azinge the first Registrar General of the Corporate Affairs Commission (CAC), from the South for decades was forced out of Office .Why is that it is only Southerners that Umar and his other Tribunal Members of the Code of Conduct Tribunal use Ex Parte Orders to remove from Office ?That Tribunal should be dissolved as it seems to be acting an ethnic script .Why has there never been a Southern Minister of FCT or under Buhari an IGP,a DSS DG,an INEC Chairman or Chief of Army Staff from another tribe different from that of the President as was the case under Obasanjo,Yar’Adua and Jonathan Presidencies ?

Tell me a case of a Southerner being replaced by a Northerner as the Head of a Federal Government Parastatal.The truth is , I have not seen one .

Buhari is not the first President of Nigeria of Northern extraction that is ruling Nigeria ,but he is the most tribal and incompetent President in Nigeria History .

Abacha looks like a saint under this Repressive Buhari Regime .Abacha had more National Consciousness. Buhari is building a rail line from Kano to Niger Republic, when there is no Rail Line from Kano to Benin City .The Money used for all these comes from the Oil in the South.

The NNPC is now Northen Nigeria Petroleum Company and the NPDC is now Northern Petroleum Development Company. The oil is in the South ,but Buhari and his Co-Northern Irredentists have cornered all the juicy contracts , Appointments and Employments for themselves ,while the locals are happy with pea nuts like Security Surveillance Contracts .The Locals should open their eyes and see that alot is going g on behind those window blinds .

Buhari should clamp down on those criminals and bandits Kidnapping Nigerians on the High Ways and abducting School Boys and School Girls in the North . How come the Nigerian Military is very active when Southerners are involved ,but looks incapacitated when Northerners are involved .The Fuel that led the Nigerian Airforce to Orlu to bombard ,can also lead them to Bama and Gumi to Bombard. Why does the Nigerian Military do selective Fight against insurgents and are more brutal in the South and Benign in the North ,where as the North has the major straits of insurgency in Nigeria?The Nigeria Government is deploying different Rules that favour the North over the South in their dealings with Bodies that are perceived agents of insurrections.There is an unconfirmed rumour of people cashing out huge sums on the group kidnapping of kids in schools in the North ,a new frontiers in the human cargo business that successive Governments in Nigeria have allowed to fester despite the billions of naira that go. down the drains monthly as security votes .

Government Officials should know that security votes is for the security of citizens and not the security of the future of the Officials and their children .The Police do not have hilux Vans ,while some Governors collect about 650 Million Naira every month.What do they use the money for ?It is high time we began to audit the security votes Accounts Nation Wide . Security is a joint business of the Government and the Governed !It is not just a business of guns and bullets ,it is also a business of accountability and development.The more jobs you create as a Government ,the less you worry about security.If the rich can not provide for the poor ,the poor will find a way not to go hungry.The Criminal Code says you should not steal,but it does not say you should go hungry.When you make Laws to curb crimes also make Laws to give those that will resort to crime an alternative means of livelihood than crime .

Government should crush the Terrorists and dialogue with the Agitators and not the other way out !