Minister of State for Budget and National Planning, Prince Clem Ikanade Agba, has broken his silence over the allegation levell 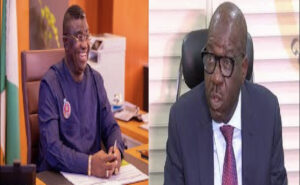 ed against him by the Edo State Governor, Mr Godwin Obaseki, that while as Commissioner for Environment in the state, he expended N30 billion on the Benin stormwater project.

Agba, in a private letter he sent to the governor on Friday, February 26, 2021 in which he made it clear that he had also copied critical stakeholders, said that he was taken aback by the N30 billion that the governor peddled as expenditure on the project.

“I dare say without any fear of contradiction, that this is not only false, but also outlandishly erroneous, misleading and patently mischievous. As the then Chairman of the Edo State Economic Team, you were privy to the conception, planning, execution and expenditure on the project,” the minister said.

He also declared that the governor could not claim to not know that only the sum of N22 had been paid to the contractor for seventy percent of the project delivered before he took over as governor, adding that “by virtue of a resolution by the State Executive Council, the Commissioner for Finance was mandated to make payments directly to contractors for all projects of the Government.

“I was therefore surprised at your decision to call me out on the expenditure of N30 billion on the Benin Stormwater project, knowing full well that I neither expended such money, nor did I have any mandate to authorise payments as the funds were not domiciled in the Ministry of Environment.”

Agba’s three-page letter, which was made available by a stakeholder who got a copy of it, reads:

“My Dear Brother-in-Law and Excellency,
“UNNECESSARY CONTROVERSY ON THE BENIN CITY STORMWATER PROJECTS

“I write in response to your recent public statements and references to my person in respect of the above subject and the consequent calls by friends and other stakeholders who feel concerned about what they see as an orchestrated and well-oiled campaign of calumny calculated to embarrass me and impugn my unblemished public service to my dear State of Edo and the Nation. I share their position.

“I resolved not to embark on any public engagement with you as doing so will certainly escalate the matter and cause avoidable media offensives which in my view, could distract both of us from the burden of leadership and our official mandates. However, sustained social and other media invectives on my person have necessitated that I do not stand back and allow my hard-earned reputation to be assailed for no justifiable reasons. This is why I have chosen this private medium to reach out to you and copy critical stakeholders.

“By the grace of divine choice as leaders, we are elders to whom our people look up for example and mentorship in virtue and in character. It is not expected in our culture for elders to engage in public spats. I do not wish to denigrate the cultural values of our people, which include mutual respect by elders. As a much older person and the number one citizen of Edo State, I do not wish to be part of any engagement or scheme that could tar your reputation or diminish your public esteem, which is underpinned by the courtesy of: ‘Your Excellency’. The above restraints, notwithstanding, I am not unaware that the resolve of your government to call me out, though on shaky grounds, might have been triggered by my recent call on His Royal majesty, Oba Ewuare II, to implore your government not to abandon the Benin Stormwater Project.

“You will recall that the project is part of the long-term Stormwater Master Plan for the State, which demands the commitment of successive administrations for implementation. My decision to call on His Royal Majesty to prevail on your government to sustain the project was in good faith. It was not meant to denigrate your person or government, but rather it was motivated by my passionate love for Edo state. Recall that shortly after your swearing in about five years ago, I sent you a series of WhatsApp messages on the need to continue periodic de-siltation of the drains to ensure that the drains are not blocked and consequently de-flood Benin City for which there was neither a response nor action from you. This, I did, believing that we are on the same page on the question of love for Edo State and, therefore, rather than yield to the rash of ill-motivated counsel of crises entrepreneurs and discord peddlers within and without, you should appreciate my call for royal intervention in that context.

“Further to the foregoing, I was also taken aback by the N30 billion you peddled as expenditure on the project. You know, and I dare say without any fear of contradiction, that this is not only false, but also outlandishly erroneous, misleading and patently mischievous. As the then Chairman of the Edo State Economic Team, you were privy to the conception, planning, execution and expenditure on the project.

“Also, Your Excellency cannot claim to not know that only the sum of N22 billion had been paid to the contractor for seventy percent of the project delivered before you took over as governor and that by virtue of a resolution by the State Executive Council, the Commissioner for Finance was mandated to make payments directly to contractors for all projects of the Government. I was therefore surprised at your decision to call me out on the expenditure of N30 billion on the Benin Stormwater project knowing fully well that I neither expended such money, nor did I have any mandate to authorise payments as the funds were not domiciled in the Ministry of Environment.

“It is strange that you raised the question of fraud on the project against me knowing very well that my role as Commissioner for Environment and that of Commissioner of Works, Osarodion Ogie, who incidentally is the current Secretary to Government of Edo State, was limited to only supervision as this was a joint project between the two ministries. Two other persons, Anselm Ojezua and Frank Evbuomwan, the current Managing Director of Edo State Geographic Information Service, also served as Commissioner of Works at different times and were involved in the supervision of the same project.

“For the purpose of clarity, the Stormwater Project has, embedded in its contracts, not only side drains, underground drains but also single and dual carriage roads with walkways and street lights. This project was conceived as a legacy of our State government, a memorable one to the Omo N’Oba N’Edo Uku Akpolokpolo, Oba Erediauwa and drew the admiration of our sustainable development-oriented President. I recall that on the 7th of November, 2016, just days to your swearing in, you stood proudly beside Mr President, His Excellency, Muhammadu Buhari, GCFR, as he applauded the administration’s team behind the conceptualization,
design and execution of the Benin stormwater whilst commissioning a segment of the Uwelu East and West Stormwater project, which is the 6-lane Siluko Road (Teacher’s House) a flood challenged area that had persisted for over twenty years to which people had lost their lives and property.

“Therefore, it is in bad taste and a mark of dishonour to suddenly disown and declare the Stormwater Project a fraud. A project that you campaigned with on two occasions: first, with the All Progressives Congress and, second, with the opposition, the Peoples Democratic Party. How and who were the parties to defraud on this signature project? I recall the words and prayers of the President during the inauguration of the project: ‘I am very impressed with the professional description by the Commissioner, how he has done the drainage and how he has done the road to make it last. This shows great commitment and God Almighty will reward you for your good intentions and for your love for your constituency’.

“Except for the intent at mischief, you have access to the true facts about the project and the expenditure thus far. Besides your silence on the extent and magnitude of the project, the sum of N8 billion, which was outstanding on the project was inherited by your government. With the expected commitment on your part, you had adequate financial resources to sustain the momentum on the project. The current sorry state of the project is therefore inexplicable and raises concerns about the negative impact of the abandoned stormwater project on the wellbeing of our people.

“While you may have some reservations about the manner of my intervention in the issue with His Royal Majesty, I do not think it should provoke a public fight. Recall that In October 2020, in obedience to the directives of Mr President for Ministers to visit their States and meet with Stakeholders, I wrote to you of my intention to first meet with you before other stakeholders, but you did not grant me audience but referred me to your deputy who, upon my arrival in Edo State, postponed the meeting to the week after. At that point, I proceeded to honour my appointment with His Royal Majesty and the Benin Traditional Council. As father to all, His Royal Majesty is an institution and a non-partisan symbolic representative of the people of Edo State. He deserves to be informed of the state of affairs in Edo. He is the person that receives the tears of the people. The tears will certainly abound when the rains come, without the drains in place.
“Recall also your Excellency that you warned Traditional Rulers in the other two Senatorial districts not to meet with me in defiance of the Presidential assignment I came for. They were with deposition if they defied your directive. As Minister in charge of National Planning, you agree with me, that interface with you and critical stakeholders, would have enabled Mr President to appreciate the critical needs of our people and how the central government could intervene. I have been having such interface with other States. Certainly, our people deserve something better than inexplicable and unproductive strife.

“In your pronouncements, you made a veiled reference to my person as “that one who calls himself a Minister” and further went to identify me as said minister stating, “This was a project supervised by Clem Agba.” This is unnecessary, uncalled for and diminishing of the exalted office you hold. Your Excellency should not be associated with such a statement, which is not only disparaging of my person, the husband of your younger sister but also derogatory of the President of the Federal Republic of Nigeria, who appointed me and the National Assembly who screened me and approved my appointment as a Minister in the Federation.

“Let us, therefore, eschew prejudices, strife and bitterness and get down to work. While it remains within the purview of your executive and discretionary powers to make enquiries, let it not be a decoy to distract attention of the people when the consequences of the abandoned stormwater project and other programmes begin to show as the rains begin to pour.

“Your Excellency, please rest assured that I wholeheartedly welcome and support your widely publicised decision to institute a probe panel to look into the Stormwater project, though you have already assumed the roles of the accuser, prosecutor and judge on the issue. It is a welcome development as all Ministries, Consultants and all other participants in the project would have an opportunity to state their own side of the story for posterity’s sake.

“I make bold to say that I am proud of the role the Ministry of Environment played in the stormwater project and I am always available to defend my role as the Commissioner of the Ministry on this and any other project that I handled in the course of my service to Edo people.

“Please accept the assurances of my warmest regards.”