The Golden Days of Nigerian Football. By :Douglas Ogbankwa Esq. 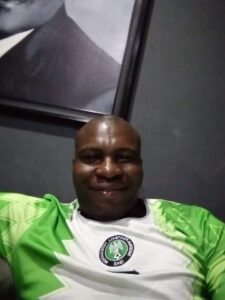 Football in Nigeria is not just a sports ,it is like a religion and Nigerians are very passionate about their National Teams.It is only when a Nigerian National Team scores a goal in a Football Match ,we hear the Country speak in one voice -“It is a goooooooooal”.

The Nigerian Senior Football National Team was called the the Red Devils,before they changed their name to the Green Eagles.The First time the Nigerian Team played a Match in England, they played with bare foot and journey by Ship to England took them close to a Month going to England similar time coming back to Nigeria.

In 1980,the Nigerian Senior National Team had a resurgence,at the National Stadium in Lagos when they won the African Nations Cup,which Nigeria hosted for the very first time with a star studded Team comprising the Minister of Defence -Christian Chukwu,the Big Boss-Stephen Keshi,Mathematical Segun Odegbami,Muda Lawal,etc.The Team was coached by the Brazilian Coach Otto Gloria.This feat heralded a period spanning about decades of Nigerian dominance in African Football and visibility in World Football.

In 1985,a young but highly talented Nigerian U-17 National Team-the Baby Eaglets went to China and won the World Cup .It was the first time an African Team was winning any World Cup in Football.The team had a lot of accolades including having houses and streets named after them in BDPA Estate,Ugbowo,Benin City .

In Chile -87,a star studded Nigerian U-21 National Team comprising the likes of Phillip Osundu,Wilfred Agbonavbare made quite an impression.Philip Osunde was to wean out of limelight after signing an ill-advised life contract with Anderlecht of Belgium.

At Maroc-88 during the Nations Cup ,Nigeria played Cameroun in the Final.Who will ever forget the clinical header of Henry Nwosu against Thomas Nkonu ,who was in goal for Cameoun,that was a goal ,but was disqualified,by a questionable call by the Referee.Cameroun was to win the Nations Cup by penalties ,a very painful end for a very resourceful team.

In 1989 ,the Nigerian Golden Eaglets who changed their name from the Baby Eagles in 1985,when they won the World Cup, went to Scotland-89 and got to the Quarter Finals.The Team which had the likes of Kayode Kashiro,Michael Okpara,etc. ,played flawless football, but lost out in the quarterfinals to an obviously overaged Saudi Arabia Team,led by the Arabian Pele-Saheed Owaran.

At the U-21 World Cup ,Saudi -89,a very talented Nigerian National Team made up of the likes of Nduka Ugbade ,Christopher Ohenhen,Mutiu Adepoju,,etc went on the way to the final of the under 21 World Cup.The exploits of the flying Eagles included the “Damman Miracle” in which the Nigerian team came from 0-4 down to equalize 4-4, against the USSR Team ,whom they played in the quarterfinals for which the NTA commentator said ,”this is impossible, this is unbelievable, this is patriotism,this Natinalism, 4-1,4-2,4-3 and now 4-4″.The Nigerian National Team later defeated USSR on penalties with an Nduka Ugbade last strike.They lost 0-2 at the final of Saudi-89 to a star studded Portuguese Team,led by Luis Figo and they came home to a heroic welcome.

At the Algiers-90,of the African Nations Cup a makeshift Nigerian Team,led by Rashidi Yekini ,Yisa Sofoluwe,etc that was given no chance,due to the absence of our Professional Players playing abroad like Stephen Keshi made it all the way to the final after defeating the Chipolopolo of of Zambia 2-0 at the Semi -Final.The Chipolopolo of Zambia was then known as the K K-11,meaning the Keneth Kaunda 11,named after their then President Keneth Kaunda, Nigeria lost at the final to the hosts Algeria .Their Sterling performance however led to their change of name by the Nigerian Media from the Green Eagles to the Super Eagles,which name has stuck till today .The Nigerian Senior National Team has now been dubbed the Super Chickens ,due to their sloppy performances of late .

At the qualifiers of the 1990 World Cup at the National Stadium,Surulere Lagos in August 1989 tragedy struck when Samuel Okwaraji slumped eventually died in the Hospital. Samuel Okwaraji the deadlocked Nigerian Midfield Maestro was an inspiration to the Nigerian National Team avowed for his selflessness and patriotism. He died leaving a nation in mourning .An unforgettable sad chapter in the History of Nigerian Football.

At the 1992 Nations Cup tagged Senegal-92, it took a Stephen Keshi 89 Minute strike for Nigeria to defeat Senegal,led by the very talented dread wearing Jules Bocunde in the opening Match of the Nations Cup.The star studded Team had Sunday Eboigbe “10-10″,Rashidi Yekini (goals-father ),Alloy Agu,Uche Okechukwu (the gentle giant”,Ben Iroha,Friday Ekpo,The headmaster ,-Mutiu Adepoju,Augustine Eguavoen,Emeka Ezeugu,Sunday Oliseh,Peter Rufai,etc.At the Semi-Final the team met the equally star studded Black Stars of Ghana led by their Playmaker -Abedi Pele ,one of the most talented footballers to come out of Africa.It was 1-1 and Ghana had a corner. Stephen Keshi was marking Abedi Pele and suddenly he broke free when the corner kick was played and he headed in a goal the NTA Commentator called a scientific goal,for which “Dodo Mayana “-Peter Rufai had no answers.

At Japan-93,the Under 17 World Cup, a close nit Nigerian Team lead by Kanu Nwankwo and Wilson Oruma ,won the U-17 World Cup.It was unique as the final was played at about 7am in the Morning Nigerian Team.The Team had Godwin Oruma,Celestine Babayaro, Emmanual Babayaro, etc.

At 1994 Nations Cup,Tunisia-1994 ,Nigerian had one of the best National Teams ever to come to the Nations cup.Nigeria was also going to its first World Cup-USA-94.The Nigerian team made up of “Dodo Mayana” -Peter Rufai,,Ike Shorunmi,Austin Jay Jay Okocha,(he was so good that they named him twice -Jay Jay ),Uche Okechukwu,Mutiu Adepoju,Rashidi Yekini,Edema Fuludu, Finidih George ,Daniel AmokachiEmmanuel Amuneke ,etc,went all the way to win the Nations Cup,after defeating a tragedy hit Zambia Team led by Kalusha Mbwalya 2-0 in the Final.

The Team which was rated the 5th Best National Team in the World, just before the 1994 World Cup was in blazing form at the 1994 Senior World Cup,when they defeated Bulgaria 3-0,in the first Match with Rashidi Yekini scoring the first Nigerian Goal in the Senior World Cup.They went ahead to defeat Greece ,2-0 lost 1-2 to a Diego Armando Maran
donna led Agentine National Team,due to a Claddio Carnegia last minute strike .The team played the second round game to a very tactical Italian Team led by Paolo Maldini.It was a pulsating encounter; in about 10 Minutes ,Paul Maldini broke Emnanuel Amuneke’s leg and he was substituted by Clemens Westerhoof -the Nigerian Coach ,Paulo Maldini ended tying his shirt to Rashidi Yekini’s Shirts for the rest of the match and the rest is history. Nigeria lost to Italy 1-2 and Italy made it all the way to the Final to be defeated by a Ronaldo and Bebeto inspired Brazil.The Nigerian Team was however named the 2nd most entertaining team of
the World Cup ,after the Winners of the World Cup-Brazil.

At the next Nations Cup in 1996,South Africa-96,,Nigeria and South Africa had a huge diplomatic row .A personality clash between General Sani Abacha and President Nelson Mandela. President Nelson Mandela of South Africa said Abacha was irresponsible and Abacha retorted: “Don’t listen to Mandela ,he has been in prison for 27 years ,he has lost touch with reality “.Nigeria ,due to this boycotted the Nations Cup in 1996.

South Africa ended up.winning the Nations Cup in that same 1996.The first and only time they have done so.They may not have won ,If Nigeria was there .

The Golden days of Nigerian football peaked at the Atlanta 1996 Olympics with a very fluid Nigerian Olympic Football Team ,coached by Bonfere Jo,made up Emmanuel Amuneke,Dosu Joseph,Kanu Nwankwo,Celestine Babayaro,Emmanuel Babayaro ,Daniel Amokachi,,etc.,which played the epic semi final against Brazil .Kanu Nwankwo became the first African Footballer to score a golden goal in a FIFA Competition and 2nd footballer ever after Oliver Biehoff of Germany,when his extra time strike made Nigeria to defeat Brazil 4-3.It was a memorable match clustered with happiness and tragedies. Who would forget the song “when Nigeria win Brazil ,when Nigeria win Brazil o,Bebeto come dey cry,when Nigeria win Brazil”.Many people died in the celebrations that followed and it seems Nigerian Football died afterwards ,after Nigeria defeated Argentina at the Finals to an Emmanuel Amuneke Strike and Nigeria became the first African Country to win an Olympic Gold in the Football Event of the Olympics .

Those were the golden days of Nigerian Football.
With the “who know man’ syndrome of running football in Nigeria now, we are left with substandard teams.Nigerian Youth tired of having their hearts broken by these mediocre teams have no option than to adopt Foreign Clubs as their” National Teams “.This accounts for the craze of Nigerian Youth for foreign teams Nowadays, our National Teams will be playing a match and you will not even Notice.Over Aged Players with unqualified administrators, who employ third rate Coaches from Europe

The re-organization of our football must start with the football federation.Politicians should keep to politics,while football experts should administer football .We want our golden days back.

Nigeria has perhaps the most talented crop of footballers in the World ,all we need is how to harness same .

As the former Coach of the Catalans Johan Cruff said :

Douglas Ogbankwa Esq.@douglasogbankwa@gmail.com, is a Benin Based Lawyer and Public Affairs Analyst .