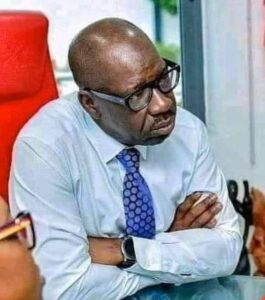 Jitters and palpable fear have been spreading in the camp of the embattled Edo State Governor Mr. Godwin Obaseki, who faces the grim prospect of being sacked by the Abuja High Court on Saturday over claims of forgery and other malfeasance in the academic credentials he presented to INEC to contest the Sept. 19 governorship election in the State.

Although declared the winner of the election, the eligibility of Mr. Godwin Obaseki to contest the election as a candidate has been the subject of legal debate following a suit by the opposition APC contending that the Governor’s university degree certificate was doctored in violation of the Electoral Act. The governor has failed to mount any serious defense to the questions posed in court and now faces a real danger of disqualification, according to sources well briefed on the matter.

Relying on the procedural standards of Obaseki’s acclaimed University, the University of Ibadan, and the testimony of other graduands throughout the institution’s existence, the All Progressives Congress argued in court that the certificate Governor Obaseki submitted to INEC could not have been original as it lacked several crucial elements, including the signature of the Registrar, a part of the Vice Chancellor’s signature and date of issue.

Astonishingly, and to his own detriment according to legal observers, Governor Godwin Obaseki implicitly corroborated the APC’s claims on the defective nature of the certificate he submitted to INEC, but blamed the omission on a photocopying error.

Per the claims of the governor, he had carelessly omitted the very elements that authenticate any degree certificate in the process of duplicating the original with a photocopier. However, this claim has been dismissed.

In its counter-argument, the APC invited a respected forensic document examiner, Raphael Onwuzuligbo Amachukwu, a retired ASP who has testified as an expert in thousands of cases related to forgery.

His testimony, based on a careful examination and juxtaposition of the certificate presented by the governor and that of other graduands of the University of the same period, shattered the governor’s defense built on the shaky grounds of ‘photocopy error’ as it revealed alterations and mismatch in the logo, character spacing, and other elements contained in Governor Obaseki’s certificate – all of which could not have originated from error in duplication from a photocopier.

Tellingly, the governor’s legal counsel shied away from cross-examining the forensic examiner or his revelations. Instead, it embarked on a series of delay tactics with the ultimate goal of drawing out hearing beyond the constitutionally permitted 180-day period permitted for the trial of the case.

Some of their efforts to delay hearing included a spurious suit filed in the Court of Appeal that was summarily dismissed; an insistence that the Abuja High Court embarks on ‘Christmas Holiday’ though the Judge established the importance of proceeding with the trial as the case is a ‘sui generic case’; and complaints in court that ‘heaven will not fall if the case elapse – it has 180-day period’ to which the Judge rebuked them by re-asserting his responsibility to do justice by all parties involved in the case.

Governor Godwin Obaseki and the PDP spent weeks evading the substance of the allegations of forgery, while dedicating efforts to stall the trial. The move collapsed, along with it the faith and confidence of supporters. With judgment set for Saturday, January 9, some of the Governor’s supporters are already expressing regret over anticipated defeat, according to sources familiar with deliberations in the camp.

There are reports of violent protests organized by some group of the governor’s supporters ahead of the court’s verdict on Saturday which is expected to disqualify Mr. Godwin Obaseki’s participation in the election and stay in office as Governor.