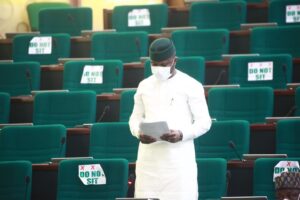 No fewer than 47 communities in Ovia South West Local Government Area of Edo have become inaccessible over the absence of link bridge connecting the communities.

Hon. Dennis Idahosa, the lawmaker representing the Ovia Federal Constituency, disclosed this to newsmen in Benin on Thursday.

Idahosa who decried the situation, said people of the communities have had to endure years of hardship and abandonment as a result.

He said that lack of a link bridge at Umaza, had not only affected their social live amongs the communities, but have also negatively impacted on their means of livelihood.

He therefore called on the relevant government agency, especially the Federal Ministry of Works, to come to the aide of the communties by constructing a standard link bridge.

Idahosa pointed out that over the years, the people, through communal efforts, had severally constructed makeshift bridges to assist the people.

“I have moved this motion in the floor of the House of Representatives on the need for government to asist the people by constructing the Okua River bridge in Ovia South West Local Government.

“It is painful and very pathetic that 47 communities in the area have been caught off from themselves and their means of livelihood deeply affected because of absence of a link bridge.

“The people who have had to endure this for years, have seen many of their love ones dies in this river because of no bridge.

“It is to prevent further loss of lives and encourage the people in their farm work that I, Idahosa, took it as part of my responsibility to alert Nigerians on the need to construct this bridge.

“When constructed, the bridge will open the agrarian communities and boost their source of livelihood which is primarily farming,” he stated.

‘The Media Circus’ – Who will Speak for Usifo Ataga? by: Douglas Aniemena