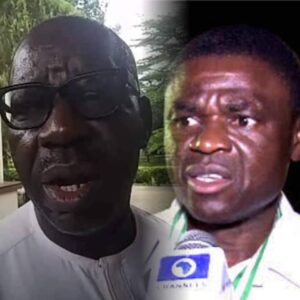 This year, I am not certain, how much the government budgeted and spent for security while the Governor’s monthly collection of N700 million security vote subsists.

But my worry is, while pocketing all these monies, why not speak up concerning the incessant kidnappings in Edo State? What about the cult-related killings and violent armed robberies that lead to the killing of innocent POS attendants and invasion of market by daredevil robbers in Benin City?

Governor Godwin Obaseki, his deputy and Secretary to State Government have neither visited or commiserated with the families of those who were either kidnapped or killed on various fronts in the wave, nor did they attempt to explain how they’ve spent monies meant for security and other efforts being made, if any.

In the year before the last, Obaseki, embarrassed by the spate of killings in the state under his watch, especially by marauding herdsmen and other criminals who have made farms a ‘no go’ area for citizens in rural communities, launched the ‘Operation Wabazigan’ security initiative with the stated mandate of improving policing.

Yes, Obaseki at the time promised a ramshackled ‘Operation Waibazigan’ security architecture ostensibly for the persecution of election purposes while the safety and security of those who voted for him and his knee-jack policies does not seems to matter to him.

Or else, how does one explain Obaseki’s refusal to at least attempt to assuage these victims and assure Edo people of their safety even during the Yuletide.

It is therefore still curious why Obaseki chose to ignore those who voted him and their families while being killed. This omission, in my opinion, is tantamount to a direct slap on Edo people who voted him and who are touched, one way or the other, by these mindless kidnappings and killings while the Chief Security Officer pockets N700 million monthly.

It is also not golden for John Mayaki to keep mute in the face of unnecessary killings – I need to shout for help from the army of neighbours within reach. I need to raise a lone voice above the ones the Obaseki government has succeeded in silencing to gaining new grounds.

And for Edo people who voted Obaseki, your silence isn’t golden when your spineless and spotless reputation is vehemently impugned or threatened and you have an opportunity to call this rudderless and callous leadership from slumber.

Silence isn’t golden when there is a cacophony of opinions and reports, especially accurate ones with video and picture evidence, assailing the public about Obaseki’s “I don’t care attitude”. Mr. Governor Sir, your silence here isn’t golden; it is grotesque, grisly and grimy especially after screening the video of the slain POS victims by robbers and experience the daily kidnappings of commuters on our Benin-Auchi-Okene road.

Governor Godwin Obaseki, this your silence isn’t golden – it’s rather suspicious and defining of your character. This isn’t leadership.