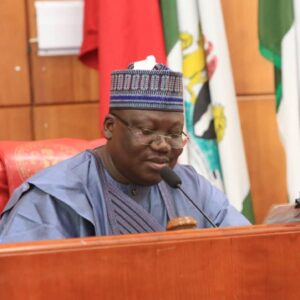 The President of the Senate, Ahmad Lawan, on Thursday, said the All Progressives Congress would continue to get defectors from opposition parties because the government of President Muhammadu Buhari had done “so much with so little resources.”

A statement said Lawan spoke in Abuja when he led Senator Ishaku Abbo and his fellow defectors from the Peoples Democratic Party in Adamawa State to the national secretariat of the All Progressives Congress.

They were received by the Yobe State Governor, Mai Mala Buni, who is the chairman of the Caretaker/Extra Ordinary Convention Planning Committee.

The Senate President said, “The more people in the opposition appreciated the giant strides of the Buhari government, the more the harvest of defectors into the APC.

“Only last week, the Governor of Ebonyi State left PDP for the APC. Yesterday (Wednesday), the youngest Senator in the current dispensation decided to leave PDP for APC.

“When you see a government trying hard with so little to ensure development, the best thing to do is to be part of that effort. That is patriotism.”

The Senate President said although the present administration inherited empty treasury, while the price of crude went down so badly, the little resources available were used to provide more infrastructure and services to the people.

Lawan said the party would ensure that it captured Adamawa State and other states in the zone being controlled by the opposition by 2023.

The caretaker chairman assured the defectors that they would not regret their decision to join APC.