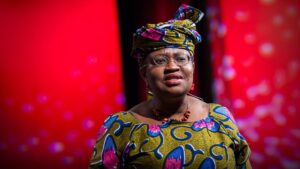 Nigeria’s former minister of finance and the frontrunner in the WTO DG race, Ngozi Okonjo-Iweala, is set to be named the new Director-General of the World Trade Organisation (WTO) after South Korea reportedly decided to withdraw its Trade Minister, Yoo Myung-hee from the race.

According to the Washington Trade Daily, Seoul is expected to announce this decision in the coming weeks; thereby facilitating the appointment of Okonjo-Iweala, based on sources close to the situation.

South Korea has already conveyed its decision to the United States; which had been insisting on the selection of Yoo.

The Donald Trump-led US administration had refused to accept the recommendation made by the WTO’s selection panel that Okonjo-Iweala be confirmed as DG, despite being voted for by 163 out of 164 members.

With South Korea’s withdrawal of Yoo, Okonjo-Iweala now has a clear path to be named the first female and first African head of the global trade body.