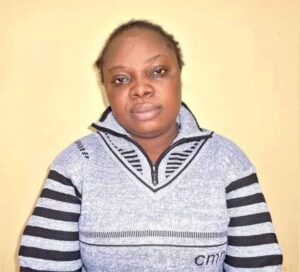 The woman who was exposed by a murtuary attendant who claims the woman was owing him money for three months without paying.

According to the man he claims the woman usually comes to him to buy the water he usually used in bathing the dead people in his custody daily.

Mrs Gloria popularly known as madam honey food was arrested yesterday the 18th of November 2020 at her restaurant in itam road.

Madam honey as popularly called claims she has not killed any one but she only use charms to cook in her restaurant because she wanted more customers and more money.

According to the woman anybody that comes in to eat her food will be coming everyday because of the Charms she used in it.

People reacted to this woman’s case some people said the where not surprised because the way and manner people que for this woman food was always so alarming.

This woman case is a very big lesson to so many people who loves eating outside.