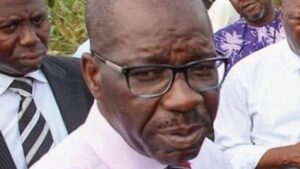 After days of killings that led to the death of about 37 persons as a result of clash between rival cult groups, the gory sights of gunshot victims across the Edo state capital seemed to simmered down owing to a meeting called by some stakeholders in the state of all the heads of the various cult groups in the state under the name rainbow coalition.

There has been no reported case of killing in the last 24 hours, but cases of robberies have continued as residents of Lucky Way, Upper mission extension and adjoining streets in Benin city were subjected to robberies all through Monday night.

The robbers who were said to be heavily armed had first gone to Lucky Way at Ikpoba till where they were said to have raided most of the shops in the locality.

They later went to a house at Imade Street where they reportedly snatched a car from its owner which they later used in other armed robbery operations.

The ravaging armed robbers later drove towards Benin -Auchi road with all the snatched cars for the evening.

Residents locked themselves up in their various houses with the fear that the armed robbers might return to the area.

It was gathered yesterday heads of the various groups met yesterday in a hotel in GRA where they all resolved to sheath their swords and allow peace reign in the state, they were also said to have agreed to pay compensation to those that clashed that led to the violent killings.

An insider said that “The meeting started on Monday and it was concluded yesterday morning. All the heads of the various groups met because the killing has become embarrassing to all, but they all concluded the meeting yesterday morning and have agreed to stop the killings and that all heads should call their boys to order and anybody found in the fight and killing again, all the groups will jointly deal with that person.

They also agreed to compensate that person that had a clash that escalated into the bloody clash. If you notice, there have not been any killings in the past 24 hours and now that this meeting has been held, the killings will stop.”