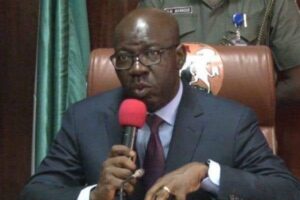 The legal issues surrounding Governor Godwin Obaseki’s alleged certificate forgery took a new turn last week as the Independent National Electoral Commission (INEC) explained it had no prerogative powers to investigate the governor’s controversial certificate. The body also claimed it had no powers to disqualify the governor over the certificate except by “an order of court”.

It would be recalled that the embattled Governor has been unable to successfully justify certain discrepancies in his certificate, which is reported to contain crucial errors.

However, the electoral supervisory body has voiced out it’s powerlessness to investigate the originality and authenticity or otherwise of the disputed certificate/document which Mr Obaseki presented to the commission for the governorship election because it was beyond its responsibility.

Meanwhile, the Peoples Democratic Party had admitted that there were noticeable errors in Obaseki’s certificate but blamed it on a mistake made in 2016. The party disclosed that Mr Obaseki inadvertently and mistakenly wrote 1976 in a portion of the form for the year of the graduation which year was the year of his admission into the University of Ibadan.

They said, “At the time Obaseki was completing his Form CF001 in 2016, he deposed to an affidavit stating that he had misplaced the originals of all of his certificates while changing offices with the intention to apply for a re-issuance if his certificates.

“The original certificate was issued in A5 size; however, in order for the photocopy of the certificate to be attached to the Form CF001, the size was reduced to A4 and in the process, leaving out some information on the certificate”.

Furthermore, INEC, being the 1st respondent in the petition filed by Action Democratic Party (ADP) to the Edo State Governorship Election Petition Tribunal holding in Benin City, also explained that, “it is also not the duty of the first respondent (INEC) to investigate the origin of the said documents duly submitted to it”.

According to the reply signed by INEC’s lead counsel, Mr. Adegboyega Awomolo, SAN, “the information given by the 3rd respondent (Mr. Godwin Obaseki) in the affidavit and documents submitted by him as a candidate at the election in INEC’s nomination form (Form C.F. 001) are presumed manifestly true or prima facie correct until and only if the contrary is proved and/or pronounced false by an order of the court”.

If the PDP loses the case, it could suffer serious consequences including the disqualification of Governor Obaseki and his eventual removal from office.

Suspect Arrested With Human Head In Ondo Dies In Hospital